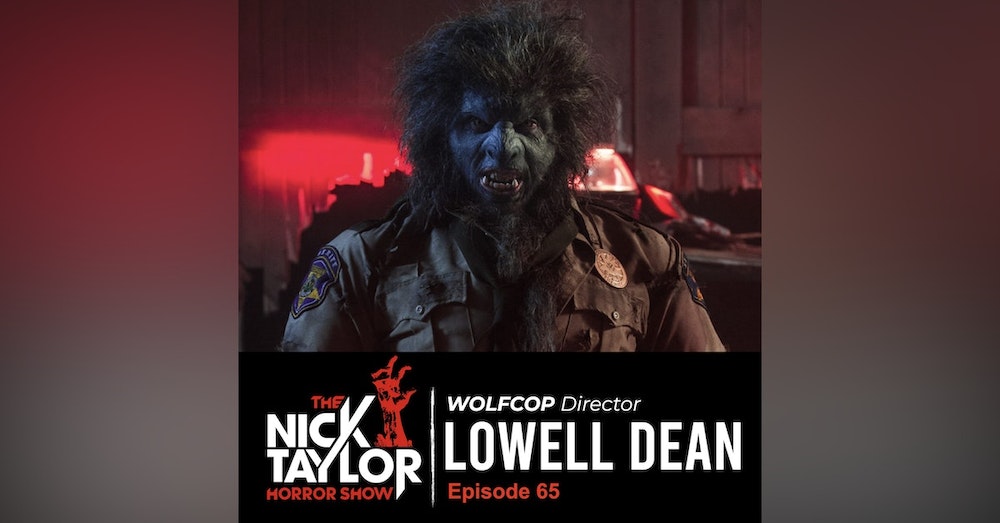 Lowell Dean is a Canadian writer and director perhaps best known for his lycanthropic cult classic WolfCop and its sequel Another WolfCop. Usually, I'm not a fan of movies that intentionally embrace campiness, but WolfCop is a different animal, well...

Lowell Dean is a Canadian writer and director perhaps best known for his lycanthropic cult classic WolfCop and its sequel Another WolfCop. Usually, I'm not a fan of movies that intentionally embrace campiness, but WolfCop is a different animal, well written, well-acted, great effects, lots of laughs, and overall a lot of fun and unmissable. WolfCop really has the spirit of the midnight monster movie and actually is the closest thing in spirit I've seen to Rob Zombie's Grindhouse concept Werewolf Women of the SS, which I'm still anxiously awaiting in vain along with Eli Roth's Thanksgiving.

Perhaps the best way to see WolfCop is on Season 1 of The Last Drive-in with Joe Bob Briggs, now streaming on Shudder.

Lowell and I talked about the making of WolfCop, his director origin story and major lessons learned from low-budget horror indie filmmaking on this episode of the Nick Taylor Horror Show. Now without further ado, here is WolfCop director Lowell Dean.

Here as always, are some key takeaways from this conversation with Lowell Dean:

Don't just come up with backup plans; communicate them. A lot of filmmakers talk about the importance of preparation and backup plans, particularly Roger Corman, but what doesn't get discussed enough is the importance of communicating your backup plans to your cast and crew. On WolfCop 2, there was an elaborate fight sequence that Lowell had originally budgeted 4 hours to shoot, but he told the stunt coordinator there was a chance they would only have 15 minutes to shoot it if the day got hectic, so to keep that in mind. Of course, to make their day, Lowell ended up having to shoot the scene in 15 minutes, and because of their previous conversation, the stunt coordinator knew exactly what to do, and they pulled it off pretty well.

Movie making is constantly dancing with Murphys Law, and the job of a director is to make your day in spite of your circumstances. So, it's not only important to come up with plans a, b, c, and d, but to communicate them with everyone around you so that when the shit hits the fan, you all can correct course accordingly together, without having to regroup or anybody panicking - all of which costs precious production time.

Be cognizant of who you ask for money. Not entirely sure if I agree with this 100%, but it's something to think about. When raising capital for his movies, Lowell avoids asking people in his circle of friends for money to avoid any potential harm to the relationship. This might seem counter-intuitive, but it's actually pretty smart. As you build your network as a filmmaker, you'll want to nourish it, and the quickest way to change a relationship is to ask someone for money. Be conscious of that, even if you have powerful and well-connected friends, that asking them for funding will change the relationship, and not always for the better. Instead of asking people in your immediate network for money, consider asking them for introductions to other people in their networks who may be able to fund your film. That creates a level of separation which can keep the friendship intact.

The path is never straight, so aim for exposure. Lowell told a great story about pitching his zombie movie to a production company for a long, long time only to find out they were greenlighting someone else's zombie movie. Lowell was given the opportunity to shadow the other director as his assistant, and rather than say fuck that, I'm too good for this, Lowell jumped at the opportunity and inevitably ended up directing that movie himself.

Clearly, nobody could have predicted this, but Lowell put himself in a position for experience and recognition, which is what you as a director must always be doing, particularly if you have zero IMDB credits. Whatever will get you on set and in front of producers is where you need to be going, so even if it feels beneath you, take every opportunity because the path you have in your mind for becoming a director is rarely the one that will work out. Jump at any opportunity that offers experience, education, recognition, or just proximity to real sets and real filmmakers.