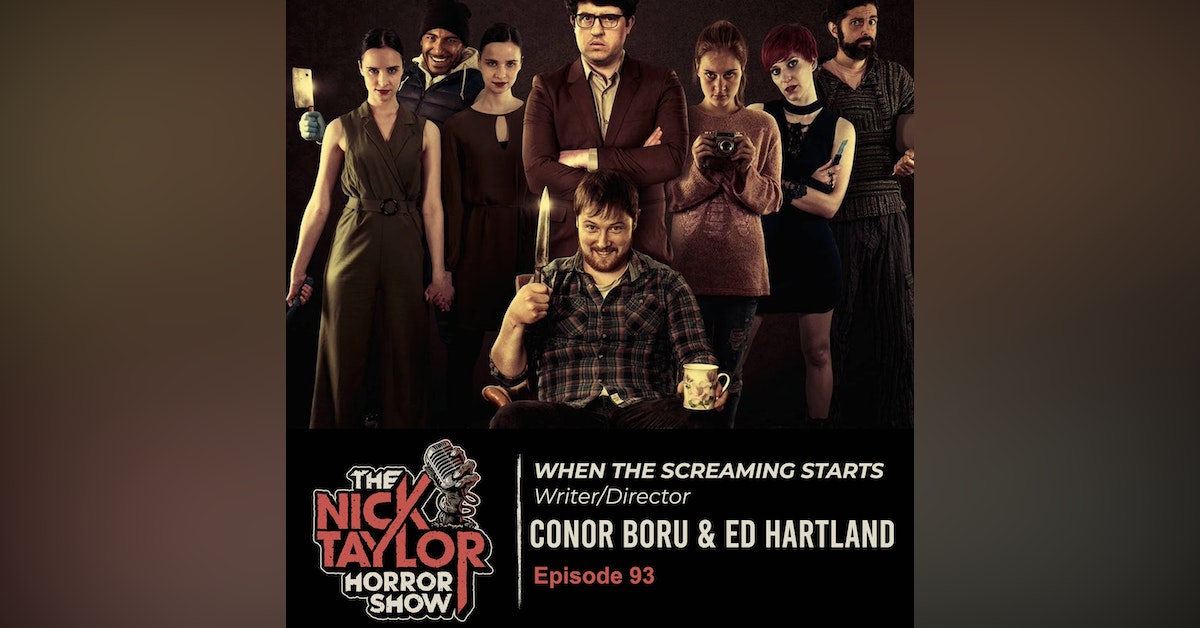 Conor Boru & Ed Hartland are the writer/director duo behind When the Screaming Starts, a serial killer mockumentary that's somewhere between What We Do in the Shadows and Man Bites Dog. Aidan aspires to be an infamous serial killer, and when...

Conor Boru & Ed Hartland are the writer/director duo behind When the Screaming Starts, a serial killer mockumentary that's somewhere between What We Do in the Shadows and Man Bites Dog.

Aidan aspires to be an infamous serial killer, and when Norman, a struggling journalist, is invited to follow him on his journey to create a Manson-esque murder cult that embarks on a blood-soaked rampage, Norman’s dream of becoming a renowned filmmaker may have just turned into a nightmare. With laughs and shocks in equal measure, When the Screaming Starts marks Conor's feature directorial debut and is streaming exclusively on Screambox.

This was a very fun interview. Conor and Ed are friends who have been working together for a long time and were finally able to come together on this movie. This is a great series of lessons on first-time feature filmmaking, balancing horror and comedy, and activating a shared mission amongst your cast and crew. Please enjoy this conversation with Conor Boru & Ed Hartland, creators of When the Screaming Starts.

Here are some key takeaways from this conversation with Ed and Conor.

Make the film you can make RIGHT NOW. Ed and Conor have been working in film for years and were dying to make a feature together. They realized that one of the most feasible sub-genres they could make a movie in, given time, money, and immediate access, was a mockumentary, so that's what they made. They wrote the movie based on what they knew they'd be able to do immediately. A common pitfall for many would-be directors is writing overly-elaborate, multi-million dollar scripts and putting all your chips on those when more often than not, directors get their start with micro-budgets. If you're a first-timer, it's unlikely you're going to get millions to make your first feature. Now, it happens, but while you're waiting on that miracle, you could be shooting something and getting crucial feature experience right now. Make the movie you can make today.

Make it a collective effort. Ed and Conor mentioned that a lot of their cast not only worked for free but actually invested money in the movie. This is pretty amazing and definitely unheard of. Conor even mentioned that unions in the UK are different from the US, but the point is still clear; they turned their movie into an asset and an opportunity for their collaborators; something they could be proud of that shows what they're capable of. For the actors, he gave them a lot of screen time and leeway to do what they wanted so the movie could act as a calling card for future project and help their careers. This is a very business-like mindset, but it's this kind of communal, mission-driven sensibility can enable you to take your move a lot further - when you and your cast all stand to gain from the movie in equal measure, you will all be rowing in the same direction. Of course, you have got to make it worth their while. Jason Blum typically does a great job of this as well.

Harness the power of momentum. Making a movie requires a debilitating amount of decisions to be made, details to be coordinated, and endless opportunities for analysis paralysis. Ed and Conor had their idea for the movie but didn't wait for things to be perfect before they started making plans. It's critical that you start taking action, making decisions, and scheduling dates for your projects - even if they're arbitrary or temporary. Once you have tangible dates and deadlines, things start to move because the movie suddenly becomes real to you and your collaborators. Find a way to get the snowball rolling so it gains momentum by any means necessary. You'll likely have to reschedule countless times, but just get it started and build momentum til the finish line.

Thanks for listening, and don't forget to check out When the Screaming Starts, exclusively streaming on Screambox.