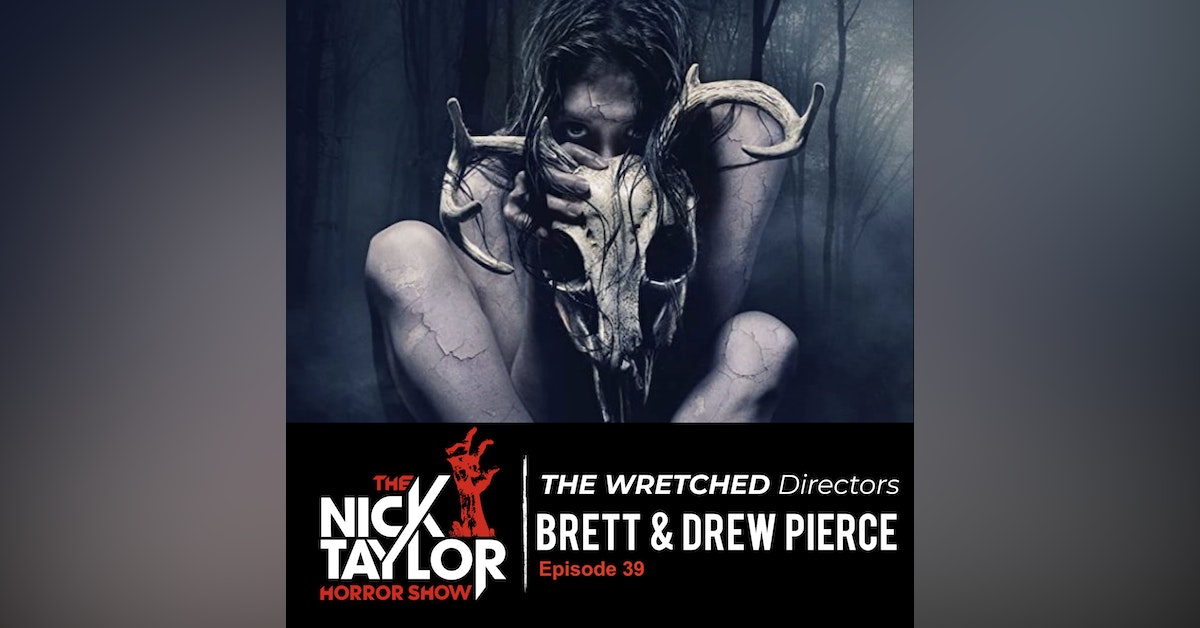 “You can't wait around for anybody, we’ve toyed with studios, but ultimately nobody cares about the project more than you, it’s like a baby.”

Welcome to the Nick Taylor Horror Show! Brett and Drew Pierce, known in the industry as The Pierce Brothers, are the director duo behind The Wretched. Picked up by IFC Midnight, The Wretched is a contemporary witch story about a teenage boy sent to spend the summer working at a beach town marina only to discover something weird going on with the house next door. Turns out the neighbors are under the control of the spirit of a wicked witch from the woods!

The Wretched is another great entry into this new season of the witch era of horror, on par with Gretel & Hansel, The Witch and Hagazuzza.

The Wretched has also been in the news recently for breaking COVID-era box office records. As the result of a strategy from IFC Midnight, The Wretched was one of few movies that were released to audiences during the lockdown to the last safe bastion of public cinema, drive-in theatres. This strategy has allowed IFC Midnight to carve out a top position in box office charts during a time when just about all other studios have frozen their release schedules.

To date, The Wretched has earned $660,000, which is so close to being 666 but I digress… Furthermore, The Wretched held a top box office position for about five weeks. Again, this is one of the only new movies being released and who’s box office numbers are being tracked right now, but it appears that horror on a big screen as a shared experience is still cherished even during these troubled times. All in all it seems Joe Bob Briggs was right, and the drive-in will never die!

The Pierce Brothers grew up on the set of Evil Dead, since their father, Bart Pierce, was on the special effects makeup crew. So it’s clear that indie horror film-making is very much in their blood. We talked about their history, The Wretched, their first movie Deadheads, what they learned, how they pitched producers outside of the film industry and we geeked out about ancient witch mythology, all of this and so much more on this episode of The Nick Taylor Horror Show.

Here are some key takeaways from this conversation with The Pierce Brothers:

Develop your idea with mythology. When conceiving of the main idea behind The Wretched, Brett and Drew observed that witches were gaining in popularity but there were no hard fast, 'silver bullet,’ 'stake through the heart' rules about witches like there were vampires, werewolves and zombies so they invented their own. To do so, Brett and Drew looked into a number of lesser known but deeply fascinating witch myths like Black Annie and the Boo Hag, which they turned to for ideas and then composited their own witch concept by picking and choosing from ones that came before.

This gave their witch a deeply textured history that was grounded in established myths. This is probably why the movie was so resonant because the mythology was based on deeply rooted stories.

Shoot in places where nobody shoots. Brett and Drew chose to shoot The Wretched in a little town in Michigan near where they grew up. They mostly shot in actual locations and hired local extras. As a result, their movie was such a spectacle that excited the local community and everybody eagerly wanted to get involved. People volunteered their houses and generally had a helpful attitude about the movie because it was so exciting.

The willingness of people to give them access to land, houses, vehicles, etc. significantly boosted their production value and the easy permits helped as well. If you’re working with a low budget, this is what you want, a helpful community. The fishing is best where the fewest go so consider shooting your movie in locations that don’t get a lot of production action. Clearly this has drawbacks in how there are no local crews and if you crack a lens it’s difficult to get a new one, but you take the good with the bad. A lot of states with fewer amounts of productions often have tax incentives as well, so look into those too.

Finish what you’re working on. Small note worth mentioning: the fact that The Pierce Brothers had completed their first film, Deadheads, on a very small budget indicated to producers that they were legit because they knew how to make a movie with very few resources. Having a history of completed projects or just one completed project that demonstrates your ability, is a big asset when it comes to raising money for your movie. So whatever you’re working on now, finish it - it can help you tremendously get the next project made.

Pitch the rich. The Pierce brothers pitched both of their movies to multiple people, many of which were not in the film industry; a lot of them were actually dentists. As Dov Siemen’s book Reel to Deel points out, dentists usually have a lot of money and frankly don’t know what to do with it, making them perfect people to fund your movie. Sam Raimi and Bruce Campbell did exactly that when they were making Evil Dead. They’d actually go to these dental industry dinner parties with a bunch of dentists and their wives and pitch them Evil Dead, and that’s how it got funded. So find some local dentists and pitch them what you’re working on; it worked for Sam Raimi and it worked for The Pierce Brothers.