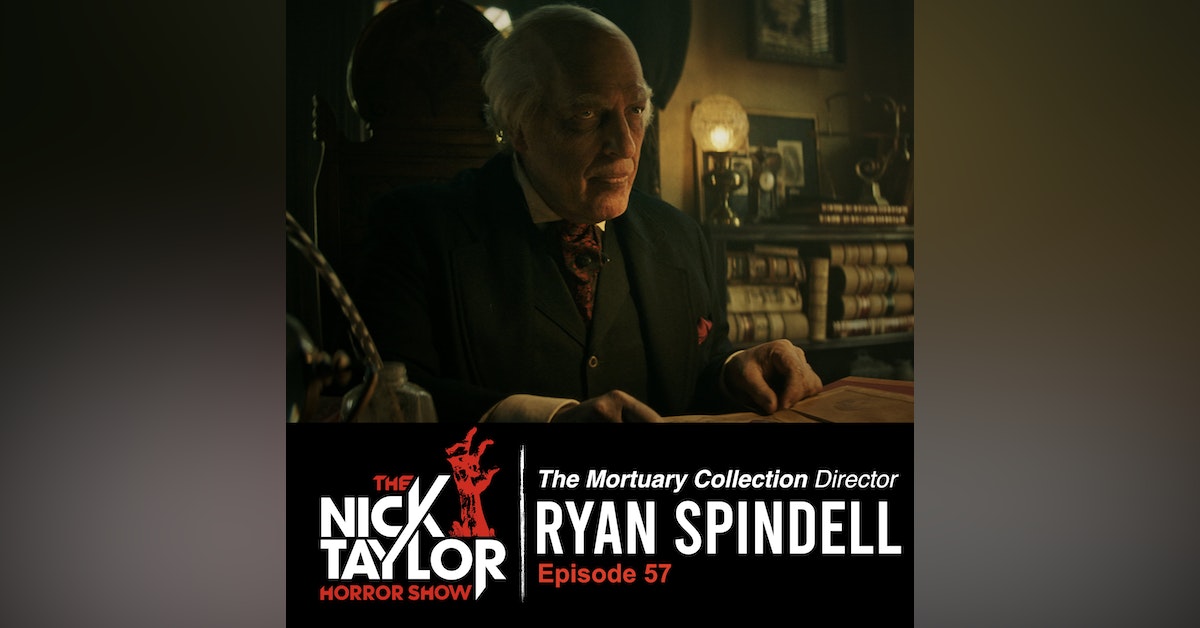 Ryan Spindell is a writer-director who recently made his feature debut with the fantastic horror anthology, The Mortuary Collection, now streaming on Shudder. Mortuary Collection blends all of the nostalgic elements of anthologies like Tales from the...

Ryan Spindell is a writer-director who recently made his feature debut with the fantastic horror anthology, The Mortuary Collection, now streaming on Shudder. Mortuary Collection blends all of the nostalgic elements of anthologies like Tales from the Crypt, Bodybags & Creepshow with spooky atmospheric nods to vintage horror, all while packing a serious punch with its comedy, storytelling, and overall dedication. Sam Raimi has been a very outspoken fan of Mortuary Collection which currently holds a 96% percent on Rotten Tomatoes. Beyond that, this is without a doubt one of my favorite movies of 2020. It’s a must-see.

Choose where to invest wisely. Ryan spent a substantial portion of Mortuary Collection's budget on production design and you can very clearly see this as money well spent on the screen as the movie has a very detailed and beautifully designed handcrafted look to it. In order to make this investment, Ryan did have to take money away from some other parts of the movie’s budget. Ryan shot less coverage and had to do fewer takes, but as a result of the investment, the movie has a killer look to it and nobody noticed the lack of coverage or fewer takes. So take note of the fact that there are parts of your budget that you can cut without the audience noticing it. If you want one part of your movie to stand out, figure out where you can cut the budget and invest in it.

It never hurts to ask. Mortuary Collection had some pretty great centerpiece practical effects in it which were done by Amalgamated Dynamics. Amalgamated Dynamics, also known as Studio ADI, is a legendary effects company that does hundred million dollar movies like Jurassic World, IT, The Predator, and other enormous blockbusters. They were clearly an effects studio that was well outside of Ryan’s budget but, he cold emailed them and in the end, they agreed to do the movie, despite the lack of budget.

This is a big testament to the fact that so many movies, particularly low budget movies, come together because of a bunch of mini-miracles. I’ve heard many stories about indie filmmakers with a no-budget movie who approach someone well above their budget and somehow persuade them to get involved. When it comes to making this happen, it’s important to remember that the real currency here is passion.

To get someone out of your league to do your movie, they have to be passionate about your project, and they have to see your passion. A lot of people in Hollywood, particularly established players, are tired of working within the studio system and hunger for something new, fun, and different that reminds them why they got in the business in the first place. If your project can give them this opportunity, you might have a shot of getting someone on board who can boost the quality of your project by a quantum leap. This is why it never hurts to ask. So aim for the fences and make those big unreasonable pie in the sky requests, the worst people can do is say no but the best that can happen is they say yes.

You need an asset.  Getting Mortuary Collection made was a very long road. One of the keys that opened doors to Ryan was the short that he shot for The Babysitter Murders. Ryan Kickstarted the short which acted as a critical asset for him when he was pitching the movie because he had a tangible sample of what the rest of the movie would look and feel like. If you pitch your movie to people by sending them a script, I hate to say it but there’s a good chance they will not read it. But when you have something that somebody can watch that demonstrates your voice, your vision, and your ability to execute, it can be pretty helpful.

This is yet another case for shorts as well as a case for just getting started. Have something in the can that shows that you’re the real deal because collaborators and investors want to know that they’re working with somebody who can finish the project. So figure out what your asset for your project is and make it. There’s a good chance it will open doors for you.

Don’t listen to the masses. When Ryan first set out to make the Mortuary Collection he was told by his reps that nobody likes anthology movies, they don't make money, and that he should abandon the project. First of all, this hatred for sub-genres seems to happen more in horror than any other genre. First people were shitting on found footage, then horror comedies and now horror anthologies - don't listen to any of it. Yes, it’s important to consider the marketability of your movie, but most of this thinking is short-sighted. As we all know, horror anthologies are making a huge comeback now, and there was even an article in the times about how it’s the heyday for horror anthologies. Had Ryan listened to the naysayers, he’d missed out on this golden era for horror anthologies and we would have been cheated out of Mortuary Collection. So let the haters hate, and make your movie anyway.

Thanks again for listening!