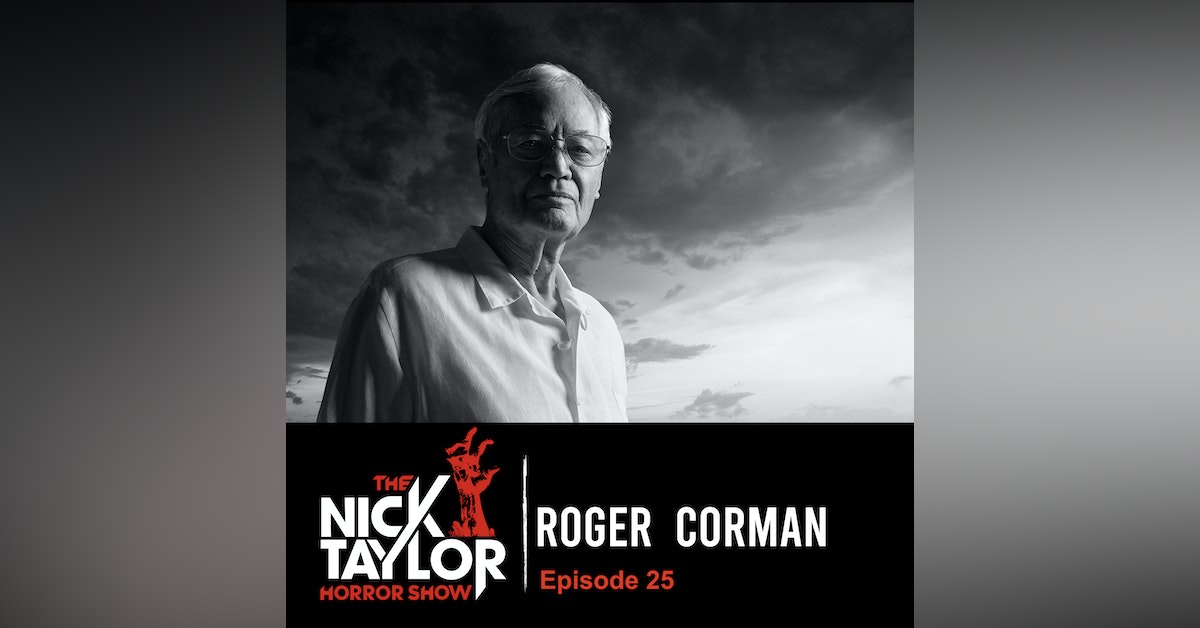 “I think the task of the horror filmmaker is to break through the conscious mind, which protects the unconscious, and hit that childhood fear, recreate it, and hopefully conquer that fear.”

Today, I am honored, humbled, and extremely excited because today we have the king himself, Roger Corman on the podcast.

Now, I am still in disbelief that I was able to even have this conversation because Mr. Corman is a man who needs no introduction. Dubbed as the 'King of the B’s' by many, he has produced over 100 movies in the horror & exploitation genres and is still working to this day at the age of 93.

Roger Corman not only produced an extensive and fundamental body of work but he birthed some of the most notable names in hollywood. James Cameron, Gale Anne Hurd, Martin Scorsese, Jack Nicholson, Francis Ford Coppola, Robert Deniro, Ron Howard, Joe Dante and Jonathan Demme are a few of the many people who graduated from the Corman school of production and went on to be some of the brightest names in Hollywood.

This was no accident, as being mentored by Roger Corman was a fast track to success. The unprecedented amounts of responsibility and autonomy that he gave to his directors and crew members, was a magic combination that empowered and educated many of Hollywood’s biggest success stories. He demanded a lot from his people, but because of it, they learned more than they ever would have elsewhere while still being able to develop their individual artistic voices.

We discussed why working for his company was able to skyrocket so many huge careers in Hollywood and we also got into Mr. Corman's leadership strategies for keeping morale high during  the harsh conditions that are common with low budget & indie filmmaking. AND we hear Roger Corman’s keys to making effective horror. All of this and so much more on today’s episode of The Nick Taylor Horror Show.

Before we get started, here are some key takeaways for aspiring directors from this conversation with Roger Corman.

Roger Corman is the original renegade filmmaker who blazed trails in independent cinema and did so entirely outside of the Hollywood establishment. Along the way, he relied on a combination of ingenuity, sheer will and a killer work ethic but his approach to production was guided by the idea that there is always a way to do anything. As such, Mr Corman never took no for an answer and would never accept hearing that something couldn’t be done.

Having the mindset of ‘anything is possible’ can actually drive your mind to find solutions. Since two of the most common terms in Hollywood are ‘no' and 'it’s impossible,' filmmakers need an iron-clad ethic of possibility. Filmmaking is a game of overcoming odds, embracing challenges and breaking the rules sometimes. If you want to break new ground, you need to believe that it’s possible.

A documentary that does a fantastic job of exploring this idea is King Cohen, the Larry Cohen documentary. Larry Cohen was another filmmaker who lived, in some cases quite dangerously, by this same credo.

One of the recurring themes of Mr. Corman's advice to filmmakers is the importance of planning. Not just planning your production, and shot list, but planning for when things go wrong, planning for adverse weather, planning for any and every disaster that can occur on set. Mr Corman insists that directors plan everything to a T, but also, that they be flexible enough to abandon the plan at a moment’s notice and improvise as needed. The sheer act of extensively planning every detail of your production will prime your mind for problem-solving, so that if something does go wrong on set, you’ll be sharp enough to think on your feet and find a solution.

Throughout the course of his career, with breakneck schedules, impossible deadlines, and very grueling shoots where everyone had multiple jobs on set, Roger demanded a lot from his cast and crew but to this day, just about everyone who's ever worked for him idolizes him. Mr. Corman emphasized that the key to maintaining high morale and motivating your crew through challenging productions is to treat everybody as an equal. Producing and directing requires that you be a strong leader, but there’s a fine line between leader and dictator, and the latter can lower morale and de-motivate your crew and ultimately harm your movie.

A key element of doing this effectively is being a good collaborator, which Mr. Corman was known for (Vincent Price talked about how he would integrate every single idea he had into the movies they worked on together).

Most creative people ultimately want to do good work and will naturally work extremely hard if they feel their efforts are purposeful and contribute to the movie. Allowing people to do their job, being open to their ideas, and staying out of their way can tap a wealth of motivation from your cast and crew that can pull your movie through the most impossible shooting scenarios.

A constant analogy that Mr. Corman makes when discussing horror is to treat it like sex, which is why he stresses the importance of starting slow, and consistently building tension to a climax. This is how good horror works, how good comedy works, and how good sex works. Remember this on set and in the bedroom.

Roger Corman is called the King of the B’s for a reason - he was always able to maximize production value on nearly every film he worked on in countlessly innovative ways which is why his movies always made money. It’s common, particularly in horror, to see movies fight against their own budget with overblown stories, cheap sets & costumes, etc. This gives films a delusion of grandeur that can undermine its story and cause audiences take them less seriously. Instead, taking the opposite approach and tailoring the script and production around the budget is a major opportunity to showcase resourcefulness & storytelling ability (which are critical especially for your first film). Part of doing this is structuring the production around what you have immediate access to... In the case of Roger, he would frequently build a set for one movie, and then write a second movie that could be shot on the same set and kill two birds with one stone.

It’s common for directors to get lazy and rest on the laurels of the blood, gore, nudity and thrills that come with genres like horror and exploitation. A lot of these movies leave out good storytelling and character development, and this is not only how bad movies get made, but it’s how careers end. (Of course, there are many exceptions).

In the case of Jonathan Demme, he added unexpected layers of depth and social commentary to Caged Heat, the likes of which the genre had never seen before. As a result, Caged Heat remains one of the best reviewed and most highly-regarded women in prison movies ever made. But more importantly, his effort and ambition enabled him to prove himself in the eyes of Roger Corman who handed him over multiple other films to direct because of the level of quality and dignity that he brought to what was considered a gutter genre. Speaking of bringing dignity to gutter genres, Jonathan Demme later went on to direct Silence of the Lambs, one of the few horror movies ever to receive academy recognition.

I highly recommend Mr. Corman’s autobiography, How I Made A Hundred Movies In Hollywood And Never Lost A Dime - it’s only about $15 on Amazon and it is pure solid gold advice for filmmakers - and it’s wildly entertaining and funny.

I also highly recommend checking out the conversation I had Joe Dante - Joe is a graduate of the Corman school and discusses a lot of lessons learned from his time working working with Mr. Corman - check it out.

If you enjoyed this episode, don’t forget to subscribe on Apple Podcasts, Spotify, Google Play, or wherever you listen. Thanks again for listening to the Nick Taylor Horror Show.