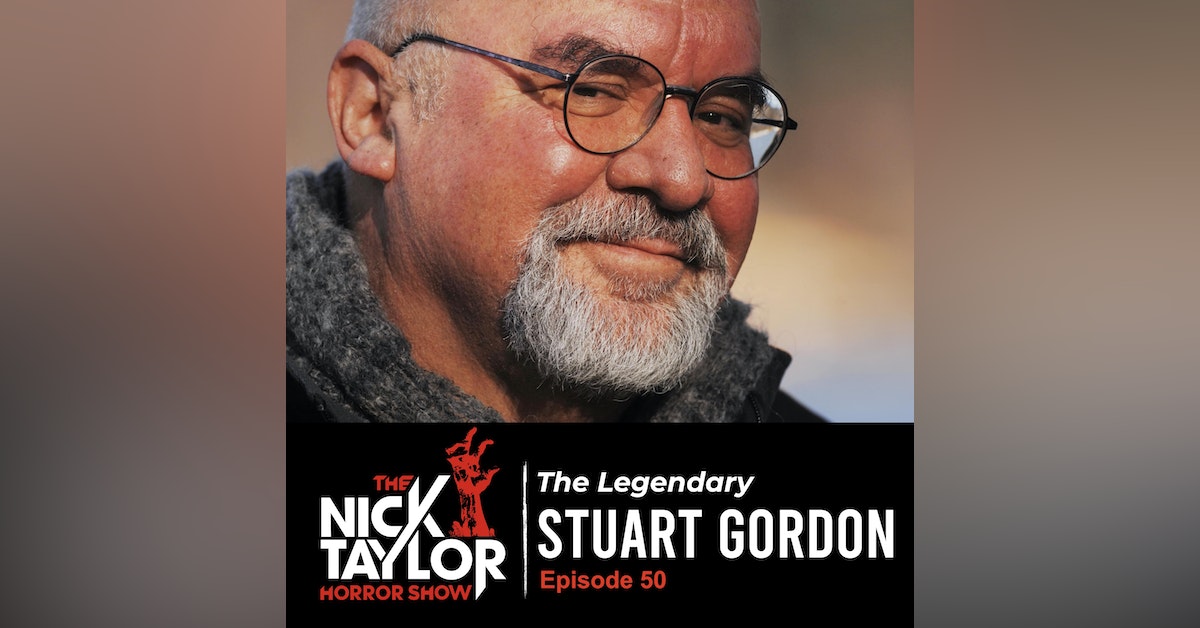 About three months before he passed, I was given the incredible honor of conducting one of the last interviews with Stuart Gordon. I’m extremely humbled to be able to air this never before published conversation between Stuart and me. We happened to...

About three months before he passed, I was given the incredible honor of conducting one of the last interviews with Stuart Gordon. I’m extremely humbled to be able to air this never before published conversation between Stuart and me. We happened to speak right on the heels of him completing his autobiography, so Stuart was in a very reflective mood.

Our conversation focused a lot around his life story, his crazy escapades in the theatre, the importance of horror, and many lessons learned from his illustrious career. One of the big things I got out of this conversation with Stuart was the importance of creating art that scares you. Stuart even mentions that if you’re a little scared by something you’re creating, it’s your duty as an artist to put it out into the world. This was very refreshing to hear from the makes of one of my favorite movies of all time, Re-Animator - particularly because we’re living in a time when there’s a palpable fear for people to say or do anything, for fear of being misunderstood or labeled.

Stuart’s work defied convention and was beyond subversiveness. He didn't just push boundaries; he bulldozed through them and created some of the most memorable horror movies we’ve ever seen. Re-Animator, From Beyond, Dagon, Dolls, and Castle Freak all have elements of madness, nihilism, psychosexuality, and very extreme taboos while maintaining a consistent sense of humor that never devolves into camp.

Stuart was also one of the most prolific adaptors of HP Lovecraft and famously brought his own wonderful and signature interpretations to the cosmic horror writer’s work. With the passing of Stuart, the horror community lost a legend, while many others lost a friend and a mentor.

I will always cherish this conversation. Here, as always, are some directorial lessons from the legendary Stuart Gordon.

Never censor yourself. This perhaps is one of the most crucial pieces of advice for horror directors. Stuart’s entire slate of movies is extremely subversive and, at times, downright perverse. A reanimated severed head going down on a woman is without a doubt, one of the most iconic moments in cinema history to a sick bastard like myself, but it would never have happened had Stuart censored himself.

In fact, when they brought Re-Animator to the MPAA, the film was given an X-Rating! Rather than editing the movie, Stuart, along with Charles Band and Brian Yuzna, decided to release the movie to theatres unrated, which was a very ballsy move back in the day, but it paid off in spades because the movie is an indelible classic. Had they censored themselves, what would Re-Animator have possibly looked like?

We are currently in an incredible era, where you can put out movies that are well removed from the judgmental eyes of the MPAA. VOD has given rise to some very extreme cinema; movies like Terrifier, A Serbian Film, Irreversible, The House That Jack Built all do whatever the hell they want, and it’s great. It is a brave new world; independent directors are no longer beholden to censorship, so why do it? Now, there’s adhering to institutionalized censorship, like the MPAA, and then there’s your own self-censorship. Stuart has confronted both.

Arguably one of the many purposes of horror is its unflinching confrontation of death, the taboo, deepest darkest fears, and all matter of material that makes motherfuckers uncomfortable. Your job as a horror director is to find that line within yourself that frightens you and make a movie about it. If your movie idea makes you uncomfortable, that’s a real good sign. That means you have to make it, as Stuart says. If you're scaring yourself, you’re on the right track. Keep going; otherwise, make a fuckin rom-com.

Rehearse rehearse rehearse. Stuart’s theatre background imbued him with a real appreciation for rehearsals; in fact, he would rehearse Re-Animator from beginning to end as if it was a play, which his cast of primarily theatre actors was entirely used to. As a result, the performances in the movie were extremely well done, the chemistry and tension between characters were palpable, and the movie hit each and every beat it set out to.

When you anchor a bonkers movie like Re-Animator with believable performances and nuanced drama from actors who take the concepts seriously, it’s a golden combination. It allows your audience to take these very insane concepts seriously because it grounds the movie in realism.

It is so easy for movies to descend into camp; what can bring your off the wall concept into the realm of realism is good performances. So cast wisely, rehearse, and consider theater actors. For more on this, listen to my interview with Knives and Skin director Jennifer Reeder.

Watch everything. When approaching Re-Animator, Stuart and longtime collaborator Brian Yuzna watched every single horror movie released in the past ten years as they worked on the Re-Animator script. This gave them a real awareness of what was working in the market as well as what the market was missing. Having such a deep awareness of the contemporary horror genre helped them make something as dynamic and different as Re-Animator. So take Stuart’s advice and watch as much recent horror as you can - this way, you can learn what the horror market has so you can deliver what it needs.

Level set with your cast and crew on day 1.

Stuart’s movies are very specific in their mood, tones, and the overall worlds that he builds. When you have movies that are as specific as Stuart’s, everybody working on them has to understand them, which is why communicating the vision of the movie to every last person on set is critical. It’s no surprise that Stuart's movies are as cohesive as they are because he always made a real effort to get his cast and crew aligned.

Stuart would kick off each movie by meeting with his entire cast and crew on day one of production to tell them why he was making that movie. This ensured that everybody was on the same page, humming the same tune, and making the same movie.

Considering all of the people that make up a cast and crew and post-production team, there are so many points of view and potential interpretations of things as well and countless opportunities for details and nuances to be lost in translation. Communicating a clear vision of your film at the beginning counters the endless potential for misinterpretation.

Anyway, thank you as always for listening, and huge thanks to Rachel Wilson for giving me the opportunity of a lifetime to have this conversation with Stuart. Thanks again, as always, for listening to The Nick Taylor Horror Show.