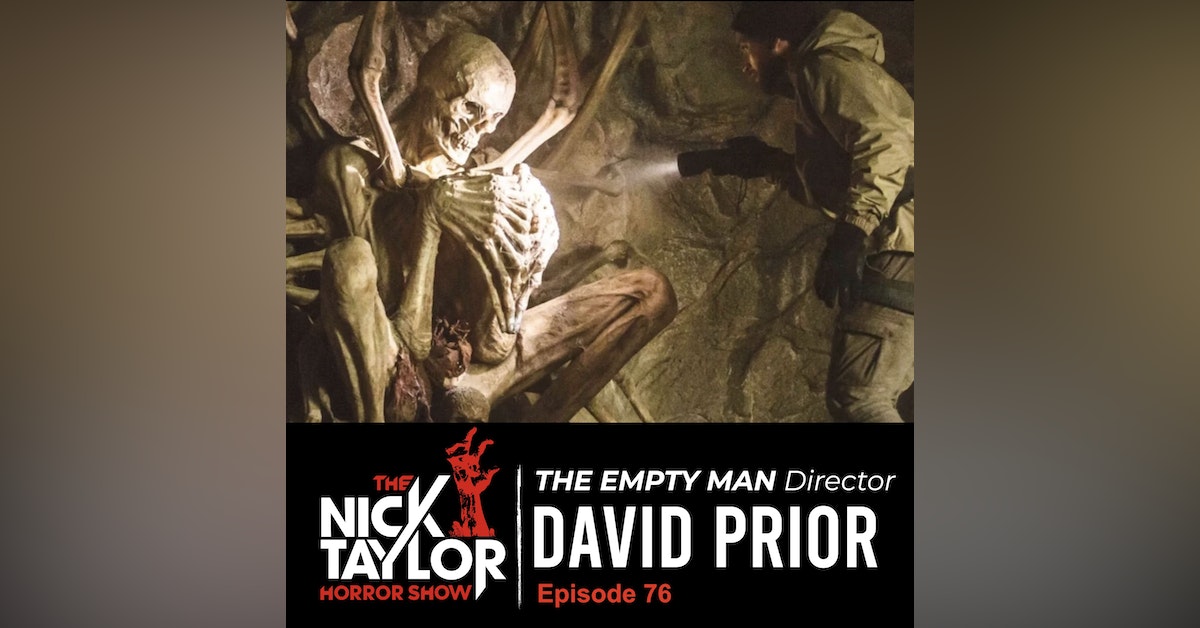 David Prior is an American writer and director who made his feature directorial debut with The Empty Man. The Empty Man is an epic in the world of horror and one of the most criminally overlooked horror movies of 2020. The movie itself has the scope,...

David Prior is an American writer and director who made his feature directorial debut with The Empty Man. The Empty Man is an epic in the world of horror and one of the most criminally overlooked horror movies of 2020. The movie itself has the scope, ambition, and execution of a Chris Nolan movie while mixing elements of cults, quantum horror, and creepypastas into an extremely unique mythology that is all its own.

Guys, if you haven't seen it, you have to. Empty Man was one of the most ambitious horror movies of recent years. The story behind the making of Empty Man is very harrowing. In the middle of shooting in South Africa, the movie was temporarily shut down due to weather conditions, during which a key studio executive who greenlit the film left the studio, essentially leaving the movie abandoned. If that wasn't enough, once the movie finally got finished, David had to endure a series of calamities, including negative test screenings and studio interference which kept the movie in limbo for years. If that wasn't enough, once the movie was finally released, it was in theatres during the height of the pandemic only to get largely negative Rotten Tomato reviews (which were very unjust) and thus be completely buried.

However, as of the past few weeks, The Empty Man has been seeing a major resurgence as a number of outspoken critics have been singing the praises of the movie and thus causing it to get the attention it deserves. The story behind the Empty Man brings to light the many issues that can befall a movie but also shows the power of the internet to champion a movie when it belongs in the spotlight. I'm personally thrilled that Empty Man is getting the viewership that it has been; it’s a must-see, and I'm convinced it will be considered a horror epic for years to come.

In this conversation with David, we got into the whole story behind Empty Man, his directorial processes, and what he learned observing directors like David Fincher, Tim Burton, and Peter Weir when he visited them on set while producing special features for multiple DVD titles. All of this and so much more on today's episode of The Nick Taylor Horror Show.

Here are some key takeaways from this conversation with Empty Man Director David Prior.

Movies are made in prep. When you watch Empty Man and observe all of the locations, decisions, camera angles, story elements, it's a comprehensive and ambitious epic of a movie. But, its budget was comparatively low. The key to accomplishing all that he did on a mid-range budget was preparation. David stressed each and every detail related to locations, productions, blocking, scheduling, and set details to an obsessive degree and made sure it was all communicated to his production crew. So much of your time in production is spent in communication and dealing with the consequences of miscommunication. If you can alleviate this by being incredibly well prepared, you can set yourself up to be way ahead of the game. This will alleviate your time, energy, and focus substantially so you can get the right shots the right way and substantially boost your film's production value because you've handled the minutia upstream. The idea of prep sounds like a little detail but can make or break your movie.

There are no greenlights. Given his experience on Empty Man, David is someone who can attest to the many difficulties that can befall a production, particularly one from a major studio. David learned that as a director, at no point is your movie ever really guaranteed. Even if your movie's been approved, even if it's been funded, even if it's been edited, you're never really safe, and therefore you can never let your guard down.

I'm paraphrasing here, but Guillermo Del Toro once stated that the natural state of a film is for it not to happen, and Rob Zombie calls every finished film a miracle because a completed production defies the odds because movie making is chaos, and the studios are ruthless.

It's hard enough to get a movie approved and funded by a studio, but at that point, the battle is far from over. Movies get canceled all the time, sometimes halfway through filming. It's a cut-throat business, and as a filmmaker, you need the kind of iron will that can push through that. Hollywood is a magical place, but it's littered with broken dreams and infinite unrealized projects, and the unfortunate thing is that it's a system that doesn't care anything about you, your script, your hopes, or your dreams. I'm not trying to sound pessimistic; in fact, just the opposite. In order to have the kind of iron will necessary, you need to realize that Hollywood is the land of Murphy's Law, and if you can go with the flow of it, and not get too disheartened or take it personally, or give up on the dream, who knows, you may just make it. Which brings me to my next point.

Be ready to die for your movie, but also be ready to abandon it.

David touched on something that I think is very interesting and potentially very groundbreaking in terms of the mindset of a director. We've established how tough a place Hollywood is, and when it comes to being successful as a filmmaker, there's a serious need for endurance and a serious need for 'a never give up attitude.' Directors essentially have to be Goonies because "Goonies never say die!" But, you also need to have the fortitude to be able to walk away.

While making Empty Man, David came across enough pushback from the studios where he was ready to throw his hands up and walk away from the project despite putting years of his life into it. Luckily the project still came to be but the fact that he was willing to walk raised the stakes in the eyes of the producers and helped build enough urgency to push the project forward. This concept is an absolute paradox and something only to be considered as a last resort, but sometimes the willingness to abandon a project is exactly what's needed to move forward, either with the project or your career. The willingness to walk can create a major shift in the power dynamic with a studio head, but of course, it can backfire, especially if you're bluffing. So tread carefully, but think about this.