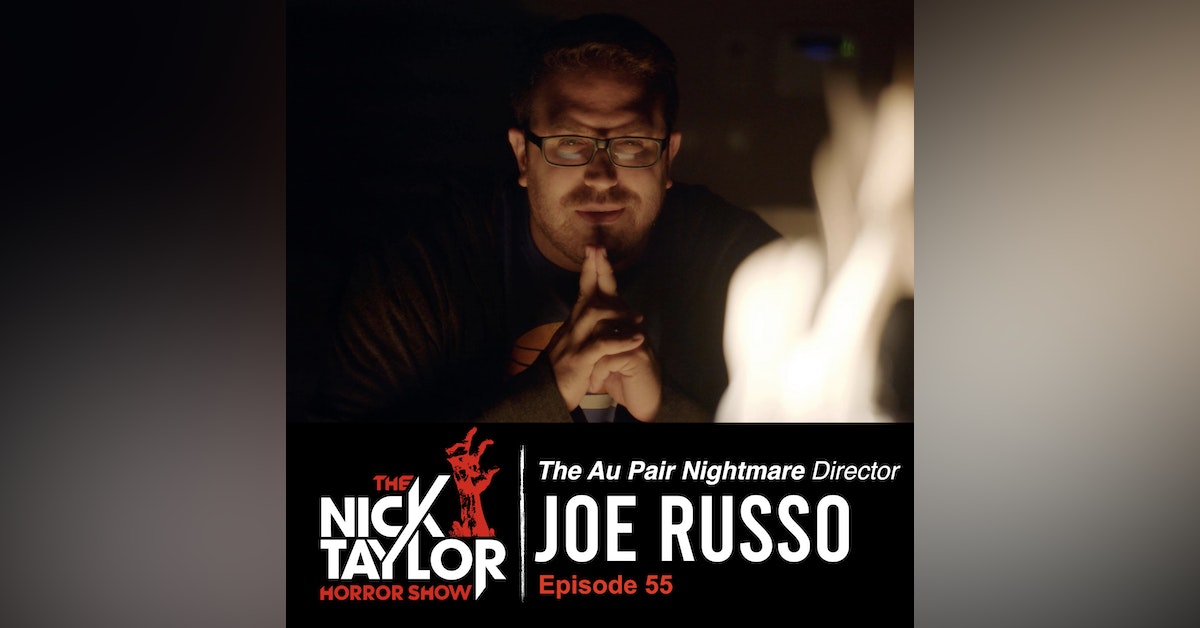 Joe Russo is an American writer, director, producer and podcaster. On top of being a very accomplished screenwriter with multiple scripts under his belt including the recent Bruce Willis thriller, HARD KILL, Joe’s had a multi year collaboration with...

Season 2
Joe Russo is an American writer, director, producer and podcaster. On top of being a very accomplished screenwriter with multiple scripts under his belt including the recent Bruce Willis thriller, HARD KILL, Joe’s had a multi year collaboration with Mick Garris, and in addition to producing Mick’s Post Mortem Podcast, Joe produced the amazing anthology Nightmare Cinema last year. Joe’s most recent project is his feature directorial debut, The Au Pair Nightmare, now on the Lifetime Network.
The Au Pair Nightmare tells the story of Taylor, a young au pair who cares for a family who holds a dark secret. It’s a great watch, and you can stream it on Prime Video right now.
He is a household name in the horror community and I really enjoyed chatting with him. Here are some key takeaways from this conversation with Joe:

Stick to your guns.

At the beginning stages of pitching The Au Pair Nightmare, Joe was offered a deal for the movie, but only if he changed a major plot point. Typically someone in the position of making their first feature would grab the first deal that came their way, regardless of the consequences, but not Joe. Joe pushed back on the change from the producer and even offered to walk away. Ultimately, the producer noticed how much he cared about his story and did the deal anyway, allowing Joe to keep the original concept in the script.

There are a number of things to be learned here. One, it’s critical to stick to your vision. Yes, movie making is all about compromises, and you inevitably will have to stray from your original vision a little bit for producers, but at the same time, your movie has to remain your movie. Producers are always testing the directors they consider working with. In this case, the producer was impressed by Joe’s willingness to fiercely stick to his original vision because this conviction is indicative of the kind of strength and commitment directors need to have on set. That alone told this investor that Joe was a worthwhile investment. So make compromises when you have to, but try to stick to your vision as much as possible.

Build a tribe of mentors.

Joe is in the very fortunate position to work closely with Mick Garris and is involved in Mick’s Podcast, where he interviews some of the greatest names in horror history. As such, Joe gets exposure and access to not only Mick but some of the other greatest minds in horror. This gives Joe a huge advantage in being able to ask people like Joe Dante for advice on his own projects. It’s a rare situation to be in, but if you can find a way to connect with other directors who you can turn to for advice on your own projects, do it.

At a pivotal moment in Joe’s career, one of the critical pieces of advice Mick Garris gave Joe was to follow his gut when it came to selecting & developing projects. Instead of being a careerist who takes what’s given to him, Mick advised Joe to follow the stories that he was naturally drawn to, and that makes all the difference in many movie careers.

A piece of advice that Mick gave to Joe was to always dig deeper into the horror element to find real, relatable emotion. Joe took this very seriously when developing the Au Pair Nightmare, which could have been a very straightforward thriller but instead had this entire level of psychological depth. Concepts like obsession & psychopathology are fascinating to explore, and this embed the Au Pair Nightmare with a real spirit of psychosis. Always take the time to dig further beneath the surface of your characters as doing so will make them more interesting, relatable, and will ultimately make the horror & thriller elements work even better.

Direct for Lifetime. As Joe Bob Briggs mentioned, one of the only companies putting out exploitation cinema these days is Lifetime. Au Pair was a little on the tame side of outlandishness, but when you look at the plots for some Lifetime movies, you’ll soon realize they are entirely modern exploitation cinema. In addition to Joe, Rebekah Mckendry’s movies have also premiered on Lifetime as well. So when you’re pitching that scandalous thriller, consider sending it to Lifetime; they’re quickly & covertly becoming an exploitation powerhouse.

Thank you for listening to The Nick Taylor Horror Show!