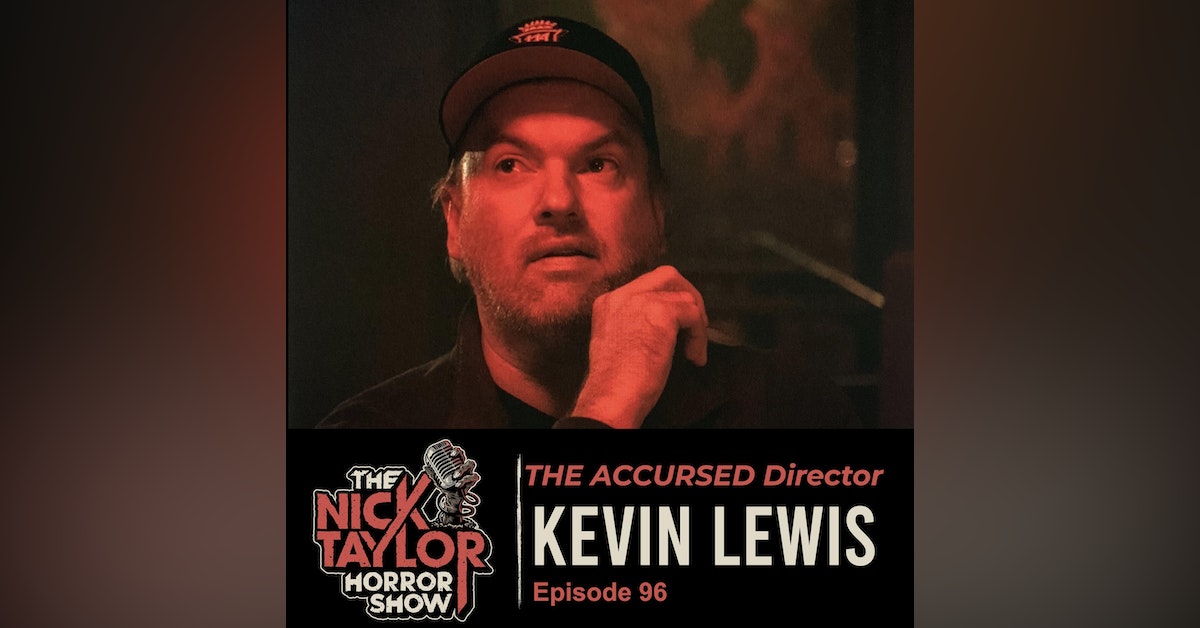 Kevin Lewis is the director of multiple features, including The Method, Downward Angel, The Drop, and The Third Nail. Last year, Kevin wowed the horror crowd with Willy's Wonderland starring Nicolas Cage, and now Kevin is back in the director's chair...

Kevin Lewis is the director of multiple features, including The Method, Downward Angel, The Drop, and The Third Nail. Last year, Kevin wowed the horror crowd with Willy's Wonderland starring Nicolas Cage, and now Kevin is back in the director's chair with his latest creation, The Accursed.

When Elly is asked by a family friend to spend a few days looking after an elderly woman living in a remote cabin, she readily agrees, thinking a short trip to the woods will be a nice escape, but the cabin turns out to be anything but relaxing as Elly begins hallucinating in ways that blur reality with her dreams. As the visions take over, Elly realizes that she was lured there by a demonic presence hiding inside of the woman, just waiting to break free.

I loved this movie, and it's hands-down one of my favorites of the year. The Accursed is a refreshingly, unabashedly fun horror movie that delivers fun and scares in equal measure on a Sam Raimi level. The Accursed is streaming on VOD beginning tomorrow, October 14th, and I recommend you put it toward the top of your Halloween watchlist - the first five minutes alone are worth the price of admission.

This is actually my second time speaking to Kevin, and if you haven't listened to the first episode, I actually recommend hearing this one first. This talk with Kevin turned out to be one of the most practical and inspiring conversations I've ever had on the podcast. Kevin is just such the real deal when it comes to directing and his level of enthusiasm is infectious, and he has many wise words for all of us. I really love this episode and will return to it frequently. Without further ado, here is the director of The Accursed, Mister Kevin Lewis.

Here are some key takeaways from this interview with Kevin:

Hook them from the beginning.

Pay close attention to the opening sequence of The Accursed, it's not only riveting, but it's a fully developed story in about five minutes. This is not only a pretty cool way to open a movie from a narrative perspective, but it's what hooked Kevin into jumping on board when he first read the script. Whether you're a writer or director, hooking the audience in the first five minutes can be very powerful, especially in horror. I really recommend studying the opening sequence of The Accursed in this context as it's a masterful example.

In his years of directing, Kevin has learned that one of the most important skills a good director has is understanding where to invest in each movie, not just money but time, effort, energy, and focus.  When making movies, you likely won’t nail every ambition you have with each film, but you need to take an inventory of what’s most important for each individual movie and its production value and then prioritize those things above all else, especially when you're on a budget. To not do that makes you subject to being spread too thin and your movie being flat. If you get just a few things really right on your movie, your audience will likely forgive just about everything else, but it's important to know what those things are that will make the most impact. There's that saying if you chase two rabbits, you won't catch either one. Don't try to nail everything on every movie; figure out what's most important and focus obsessively on those things.

When it comes to a career in filmmaking, living a fulfilling and interesting life is important, not only for the sake of your creativity but for the sake of your longevity. As Kevin stated, the movie industry is tough and ruthless, and if you let it rule your life, it will run you into the ground and burn you out. At age 51, Kevin is having his heyday with a killer one-two punch between Willy's Wonderland and now The Accursed and multiple more movies on the way. Kevin is also a father of four and has lived his life his own way without letting the industry wear him into the ground. In other words, he didn't feel the need to sell his soul to Hollywood and sacrifice what mattered to him most, and I think this is a huge lesson.

Clearly, it's critical to be obsessively dedicated to your filmmaking craft, but detaching from this grueling industry will not only re-energize you but make you less desperate and more likely for your mind to be open and objective enough to put your best work into your project.

Anyway, thank you as always for listening - if you want to hear more from Kevin, go back and check out Episode 72, which is way more comprehensive about Kevin's backstory and the making of Willy's Wonderland. Also, don't forget to check out The Accursed, streaming on VOD, beginning tomorrow - you will not be disappointed.