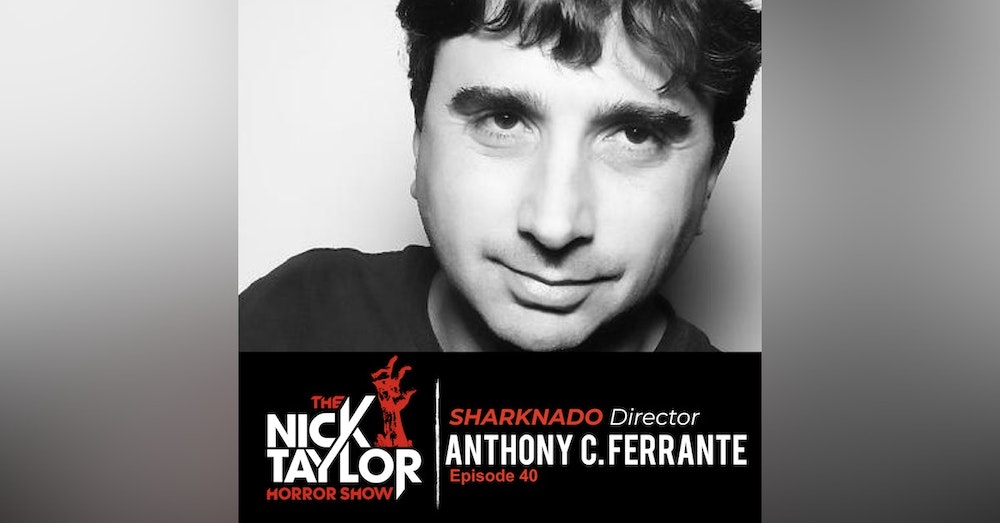 Anthony C. Ferrante is an American filmmaker, director, and writer, best known for being the man behind the Sharknado franchise. In addition to Sharknado 1, 2, 3, 4, 5, and 6, Anthony has directed such horror hits as Boo, Forgotten Evil, and Zombie...

Anthony C. Ferrante is an American filmmaker, director, and writer, best known for being the man behind the Sharknado franchise. In addition to Sharknado 1, 2, 3, 4, 5, and 6, Anthony has directed such horror hits as Boo, Forgotten Evil, and Zombie Tidal Wave.

Anthony and I talked a lot about Sharknado, as well as how he’s able to make his sets an unbelievably fun experience that attracts his cast and crew to constantly want to work with him. This is a real art when you’re working with low budgets, which all of the Sharknado movies were on, but Anthony has a lot to say on the topic of making your sets enjoyable. So we get some tips on that, discuss COVID-era filmmaking and hear more about what he has in store next. All of this and so much more on today’s episode of The Nick Taylor Horror Show.

Here are some key takeaways from this conversation with Anthony C. Ferrante.

Embrace the energy of desperation. The Sharknado movies are what Anthony calls $20 million movies made for $1 million. When you have a scope that big and a budget so low, every minute on set counts as does every dollar spent. Collectively, this can cause filmmakers and crew members to often scramble and hustle on sets because time is money. These kinds of circumstances and this energy often translates to the screen and it makes for a very interesting and fun vibe. (Just look at Evil Dead.)

Having less time and less money also forces quick decision making and this decisiveness will only serve you as a director in the future, given the millions of decisions that have to be made on productions.

When big budget films are shot at a slow, lumbering and comfortable pace, and everything goes smoothly, it often translates to a pretty boring movie (of course there are many exceptions). But, you’re an indie filmmaker, your movies are supposed to feel rough around the edges because they were such a bitch to make! Don’t fight this, embrace it because it will serve your film and give it a noticeable energy.

Sometimes they just got to trust you. Anthony described a case on one of the Sharknado movies where he had to improvise a brand new complicated scene on set because at the last minute, certain important props and center pieces weren’t available.  Flying by the seam of his pants, he had to improvise an elaborate action sequence that he could see in his head and he had 20 minutes to do it. He went to his actors and simply said: 'trust me and follow exactly what I’m saying' and they worked it out in one shot that was filmed and edited in real time. Sometimes you’re not always going to have time to explain every last detail of every last decision to every single actor. In order to properly orchestrate what you see in your head, you need to build trust with your actors. This often comes with time, and definitely has to be earned.

Empathize with your entire crew. When it comes to low budget movies, there is such a fine line between a fun set and a hellish set. Low budgets, punishing schedules, and grueling elements can either wear everyone down or pump them up. Some indie movies are a blast, and people talk about how they were paid next to nothing and loved every minute of it. When you hear Howard Berger & Greg Nicotero talk about working on Evil Dead, there’s a clip where they mention that they were paid $400 a week but every single day was like summer camp and they would have done it for free.

I’m not saying not to pay your cast and crew as well as you can, but what I am saying is that it is part of your job as a director to build a set that people are going to want to come to, partially because you are going to want crew members to become longtime collaborators. Anthony talked about how the key to doing this is understanding that everyone is doing a job, and that you have to give them the time, space, respect, and resources to do their jobs. This largely comes down to empathy and understanding what each job entails which is why Anthony always urges aspiring directors to learn as much as they can about every job done on films. He actually has worn multiple hats across multiple productions which has helped him empathize with his crew and run better sets.

Will you have to continually inspire your crew? Will you have to remind them you’re running out of time and money? Will you have to crack the whip sometimes? Of course, but there’s a conscious & respectful way to do all of these things. Mastering this concept can turn your rag tag indie crew into a community and ultimately an unstoppable force. So make a conscious effort to make your productions an enjoyable and overall positive experience, because it can so easily be the opposite.