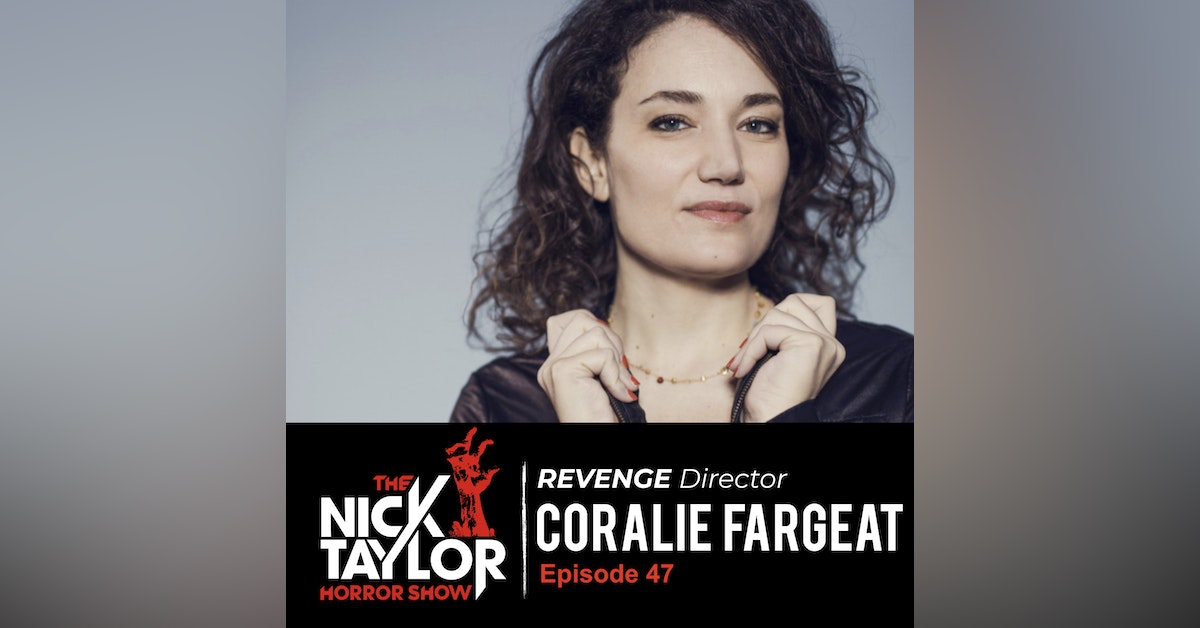 "We all were facing the same problem, and we said to ourselves, maybe rather than complain about this system that is so bad, maybe we have to think about what we can do differently to be able to make our movies."

Coralie Fargeat is a French writer and director who made her feature film debut with 2017’s Revenge, now streaming on Shudder.

Coralie started her career in France as an AD, and shortly after realizing that she wanted to be a director, she made a short and took it on the festival circuit. The short opened many doors for her, and from there, she wrote multiple screenplays and took writing classes, all of which collectively helped her find her voice as a filmmaker.

This path led her to pitching the concept of Revenge to multiple producers, ultimately striking a deal. In this interview, we hear more details about Coralie’s filmmaker origin story, how to be an assertive director, and tips for creating your own local filmmaking community and support system. All of this, and so much more on today’s episode of The Nick Taylor Horror Show.

Here are some key takeaways from this conversation with Coralie:

Prep your materials. In addition to the script for Revenge, Coralie wrote a 40-page treatment that described the story, plot, subtext, and visual cues in stark detail. This really conveyed to producers that she had a real clear vision for this project. She also did a ripomatic treatment reel that showcased tonal references of music, movie clips, and images that further defined the movie. All of which gave the producers more confidence in the movie and in her.

Conflicts are inevitable. Sometimes in the heat of the moment on a grueling set while you’re over time and over budget, you don’t always have time to explain things. And as much as I hate to say it, according to many directors, sometimes you don’t always have time to be nice. Yes, as a director, you should strive to make every effort to be as respectful and kind to your cast and crew as possible, and as Chelsea Stardust mentioned in a  previous episode when it comes to filmmaking, “it’s chaos, be kind.” However, throughout the course of making films sometimes, you will have to enter conflicts assertively so you can get what you need.

There’s a difference between being an asshole and being strategically aggressive. If you’re a miserable fuck face on set who yells and screams all day every day, your crew will check out instantly and underperform. And you’ll deserve it. But if you’re too nice, you run the risk of being taken advantage of. There’s no clear answer here, but this is an eventual scenario that all directors will have to face and figure out on their own. Coralie discussed her own struggles with this, but how inevitably, she had to get things done her way by whooping some asses here and there, but she did so strategically.

Eli Roth tells a story about the first day on the set of Hostel. He and a bunch of his crew members bonded over drinks the night before production, and he went back to his hotel room early, but the crew stayed out drinking and showed up on set completely hungover. Thinking that Eli was their friend, they felt entitled enough to do this without consequences. They were wrong. As a result, they dragged ass on set, and without batting an eye, Eli yelled and screamed at the guilty parties and even fired some of them. As harsh as this may sound, this set a precedent on his sets that this type of behavior will not be tolerated.

If it’s not your nature to be aggressive or assertive, it’s important that you think about the bigger picture. Coralie touched on something so obvious but I rarely hear directors mention it, and that is that you are going to have to live with your film for the rest of your life. Every frame, every detail, every decision will be etched in stone. So those moments on set when you have to fight to get what you need or fight to get something done the right way, are all worthwhile battles because you only get one shot. Film is permanent. Do not let anybody off the hook, especially yourself.

Stare into the void. If you're a first time filmmaker, nothing can prepare you for your first movie. Yes, make shorts, go to film school, read Making Movies by Sydney Lumet, and watch every single special feature making-off that you can. But, things will inevitably go wrong, there will be things you don’t know how to handle, crew members may turn on you, effects may break down, and that scene you agonized over, might not end up working. Now, the way that you respond to these things, the way that you handle yourself when you’re at the mercy of all the things that go wrong on set, that’s directing.

Coralie mentioned how her work as an AD led her to realize that directing is problem-solving. Because of this, she was able to approach her first film with confidence, despite not entirely knowing what she was doing. But, she figured it out along the way and made a kickass movie regardless.

A lot of would-be directors get daunted by the thought of their first movie or spend too much time preparing, or over-educating themselves instead of just doing it. Successful first-time filmmaking is a messy process and largely a matter of jumping head first into a difficult shoot and flailing your way through to make your days and somehow, by the grace of god, making a good movie in spite of it all.

As important as preparation and education are, as a filmmaker, you can never be fully prepared for the difficulties your movies will bring you. You’ll simply gradually get better with every single film that you make. So if you’re approaching your first film, embrace feeling stupid, embrace feeling unprepared, embrace impostor syndrome, and embrace the fact that you don’t really know what you’re doing. Because nobody ever really does until they get a few films under their belt.

Build a collective. I was shocked to hear Coralie mention that horror and genre films were not widely accepted in France despite the French extremist horror movement. As a result, Coralie built a community of other aspiring genre filmmakers who would learn from each other, pool resources, and ultimately become a support system. They would even invite industry professionals, like writers, directors, and producers, to share their experiences on filmmaking and work with first-time filmmakers.

These kinds of relationships are priceless. Not just from a networking perspective but from a life perspective. As the saying goes, you become the sum total of the five people you spend the most amount of time with, so if you want to be a filmmaker, spend time around other filmmakers. Are you in a small town with not a lot of film people? Turn to social media, hold meetings via Skype, Zoom, or whatever. OR, start a podcast :) You’ll need a community, a family, to fall back on when the going gets tough, and Coralie attributes her ability to overcome the many difficulties she experienced producing her first movie, to this community that she built. So find your tribe or build it from scratch.