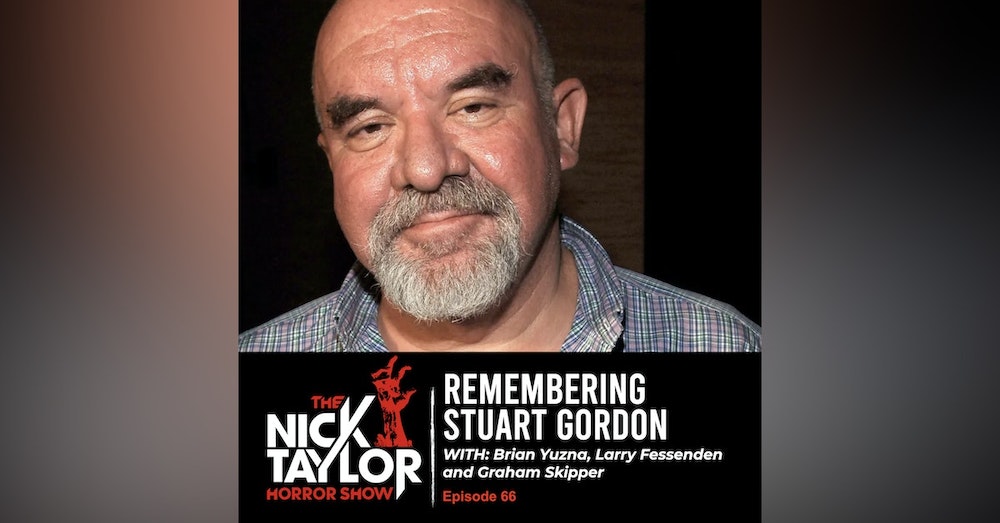 Welcome back to the Nick Taylor Horror Show! As we put the literal horror show of 2020 behind us, I felt it was important to kick off this year with an episode about someone we lost last year, who left a tremendous void in the horror community, and...

Welcome back to the Nick Taylor Horror Show! As we put the literal horror show of 2020 behind us, I felt it was important to kick off this year with an episode about someone we lost last year, who left a tremendous void in the horror community, and that, of course, is Stuart Gordon.

To call Stuart a boundary pusher would be an understatement. Stuart taught entire generations of horror directors how not just to push boundaries but decimate them, and by doing so, show audiences the true power of horror. Stuart meant a lot of things to a lot of people, and one of the most recurring themes of conversations I've had with people about him is just how dedicated he was to mentorship and the craft of art.

I was fortunate enough to have conducted one of the last interviews with Stuart last year, and I highly recommend listening to that conversation if you haven't already. My conversation with Stuart was right after he had written his autobiography so he was extremely reflective and was incredibly generous with his wisdom, so check that episode out if you have not already. It's great, and I was pinching myself the entire time.

For this episode, I wanted to dig deeper into Stuart's prolific life by talking to some of those who were lucky enough to work with him. This episode features three separate conversations about Stuart with Brian Yuzna, Larry Fessenden, and Graham Skipper. Each person reflects on Stuart's life, his legacy, and what they learned from him, and I was really floored at how much insight came out of each of these conversations. Each interview turned out to be practical, revealing, and extremely fun.

So, with that in mind, I hope you enjoy these three conversations about the life and work of one of our fallen masters of horror, Stuart Gordon. I'm going to start with perhaps Stuart's closest collaborator, Brian Yuzna.

Brian is a man who needs no introduction. A writer, director, producer, Brian Yuzna produced multiple movies that Stuart directed, including Reanimator, Dagon, From Beyond, and Dolls. Brian directed one of my personal favorite deep cuts, Society, which if you haven't seen, do yourself a favor and watch it, ideally with Joe Bob on Shudder. Brian also directed Bride of Reanimator, Silent Night Deadly Night 4, Beyond Reanimator, Return of the Living Dead 3, which is fucking insane and fantastic, and not enough people talk about it.

Brian and Stuart have a famous collaboration and, in partnership with each other were responsible for some quintessential horror classics. As a duo, they were unstoppable and I was very fortunate to be able to speak with Brian in-depth about their collaboration. Without further ado, please enjoy this conversation with Brian Yuzna.

Larry Fessenden is an American director, producer, writer, and actor. Larry’s career highlights include Habit, Wendigo, The Last Winter, and 2019's Depraved. I always love talking to Larry. As far as indie filmmakers, Larry is such the real deal, and I like to call him the East Coast Corman because he's not only a prolific director but he's mentored and groomed multiple directors like Ti West, Jen Wexler, and Jim Mickle. Larry and Stuart never actually got to work together on a film, but for years had a number of projects that they were developing. This conversation was mostly about what Stuart inspired in Larry as a filmmaker, as well as some details about the lost projects they were working on that unfortunately never came to be. Lots of great wisdom here. Please enjoy this reflection on Stuart Gordon with the great Larry Fessenden.

Graham Skipper is an American actor, director, and writer. He's directed multiple horror movies, including Space Clown and Sequence Break, now streaming on Shudder. He also reprised the role of Doctor Herbert West in Re-Animator: The Musical and starred in multiple Joe Begos movies, including Almost Human and The Mind's Eye. Graham worked very closely with Stuart on Reanimator the Musical and was lucky enough to have developed a close relationship with him. There are multiple wonderful lessons Graham learned from Stuart, and he was gracious enough to share them with me - so please enjoy this conversation with Graham Skipper.

Thanks again for listening!