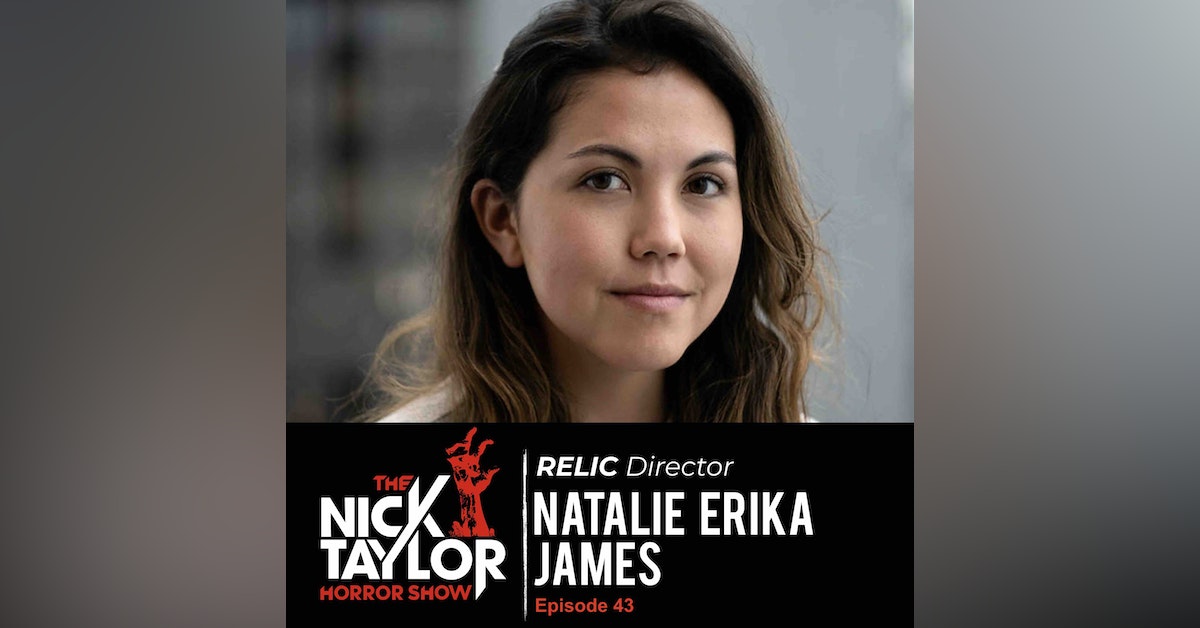 “ There was no separation for me between art and life, which was powerful in some ways and painful in others.“

Relic is one of the newest movies from IFC Midnight and the feature debut of Australian filmmaker, Natalie Erika James. Relic tells the heartbreaking story of a family of women dealing with the mental decline of their matriarchal grandmother due to what seems to be Alzheimers, but upon closer inspection appears to be something malevolent and evil.

Relic was a very striking & multifaceted movie, and I highly recommend it. It blends very deep emotions, with atmosphere, and eeriness and nuances all while confronting serious themes of familial trauma and tragedy. One of the reasons Relic is so emotionally poignant is because it was based on Natalie’s own family struggles with the gradual decline of her grandmother due to Alzheimers. You can tell by watching it that Relic is a deeply personal story, and it takes a certain amount of bravery to explore that as deeply as Natalie did.

Ultimately, Relic hits all the right emotional notes and delivers the scares in equal measure, and overall was one of the most exciting horror movies of this year. Natalie really knocked my socks off with Relic and I truthfully can’t wait to see what she does next. Now without further ado, please enjoy, Natalie Erika James.

Here are some key takeaways from this conversation with Natalie:

Seriously, make shorts. Shorts are a big argument within the filmmaking community, but most directors I’ve spoken to swear by them as a necessary part of becoming a director. Natalie took her short on the festival circuit and it got her representation which ultimately enabled her to make a very legitimate feature debut with a healthy budget because producers knew her style and what she was capable of.

Now this is a unlikely example but the power of Natalie’s short got her an agent which helped her get producers like Jake Gyllenhaal and the Russo Brothers behind her. (Yes that’s Marvel/Avengers Russo Brothers). Clearly there’s more to this story, and it took years for this to all come together, but, having a rep really helps, so make a short get a rep.

Don’t overlook your mental health.Indie filmmaking can be agony, and often involves multiple sleepless nights and endless amounts of stress, all of which is par for the course. However, as Natalie pointed out, as a director your mental health is of the upmost importance and typically it’s one of the most overlooked elements of filmmaking. Natalie states that she would take walks to figure out difficult scenarios, and turned to meditation to better equip her cognitive health. The better your mental health, the less emotional you will be and the better you will be at being creative and solving problems.

This is particularly important at the very beginning stages of your production because you’ll want to be as clearheaded as possible and save your steam for the end so you don’t burn out prematurely.

Yes, many stressful elements of directing are entirely unavoidable, but do what you can to be as rested and mentally healthy as possible on your sets. It’s very easy to forget about this in our hustle bustle culture but find ways to sneak in naps, and take those brakes when you need to. It doesn’t make you lazy, it makes you a smart director who knows how to manage their creative and cognitive energy. All of which ultimately will serve your movie.

Get personal. Natalie put her own personal story into Relic, however when you watch the movie, it’s easy to project your own experiences and interpretations into it and that universality is what makes Relic so powerful.  Bottom line, the more that you open up, the more your audience will relate to you. Clearly you’re not gonna reach everybody, but the deeper you go into your own personal story, the more powerful and effective your movie will be for others.

Chances are others have dealt with something similar and your movie will convey to them that they’re not alone. This is the true power of this level of personal filmmaking and horror is the most perfect genre for doing this.

The events that occurred in Relic are clearly not what happened to Natalie‘s family, but they are inspired by it and the movie is no less powerful, in fact the horror element makes these emotions work at an even higher level. Horror is the one of the best metaphorical vehicles for exploring and addressing trauma, tragedy, and topics otherwise difficult to confront.

No other genre really lets you do this as safely as horror. So if you have a deeply personal story to tell, the horror genre can really let you run wild and confront real horrors in extreme ways. The entire process can be healing to the filmmaker, and if it’s healing to the filmmaker, it’s going to be healing for audiences. This is one of the many reasons why horror is an important genre.