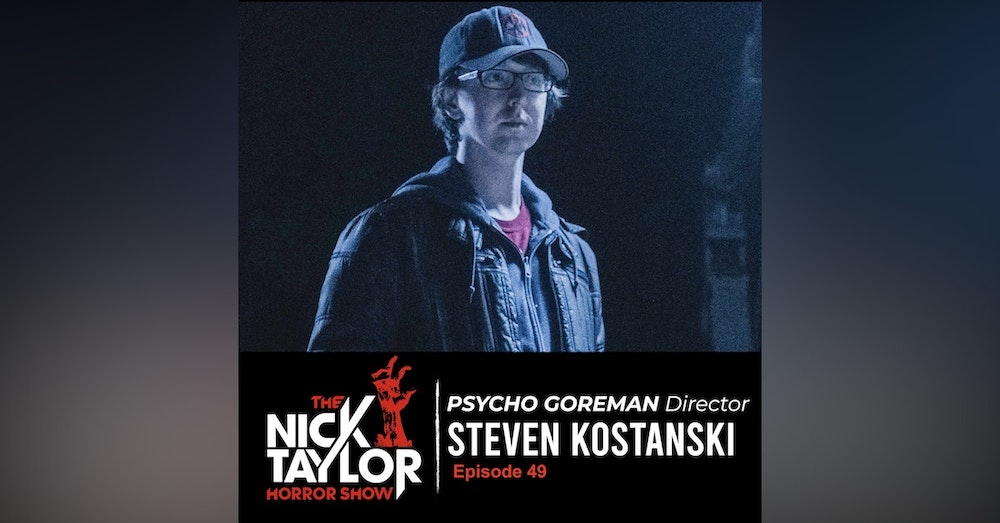 Steven Kostanski is a writer, director, and practical effects makeup artist. His latest movie, Psycho Goyreman, is about to be released and it looks fuckin awesome! Prior to Psycho Goreman, Steven directed Leprechaun Returns, Manborg, and The Void....

Steven Kostanski is a writer, director, and practical effects makeup artist. His latest movie, Psycho Goyreman, is about to be released and it looks fuckin awesome!

Prior to Psycho Goreman, Steven directed Leprechaun Returns, Manborg, and The Void.

The Void is an incredibly impressive movie. Imagine a deadly cult film that mixes The Thing with Hellraiser in a Lovecraftian universe.

Making The Void was an incredibly hellish experience and we hear first hand from Steve what it was like to be in the trenches of a brutally difficult shoot and how he was able to overcome it and become a better director in the process. I highly recommend The Void, which you can stream on Shudder right now.

In addition to being a director, Steve is also a practical effects makeup artist who designs and builds the creatures in his films. Steve was a student of Dick Smith's and we hear some great stories about him.

Here are some key takeaways from this conversation with Steven Kostanski:

Multi-task if you’re multitalented. Steve puts different parts of himself into each of his movies by personally handling the effects, creature, and costume designs. He claims that if he isn’t flying on all cylinders on a movie, he has a sense of creative anxiety. This is not about control, but it’s about scratching your own creative itches if you have them. If there are multiple elements of your movie that you can single-handedly handle, you should try to do that. As important as delegation might be on certain movies, being so hands-on gives you the opportunity to give your movie a very signature aesthetic which Steve’s movies all have. So if you are multi-talented, embrace this urge within yourself and try wearing multiple creative hats on set.

If you’re going through hell, keep going. Steven and his co-director on The Void, Jeremy Gillespie, are outspoken about what a hellish nightmare it was to make The Void. It was so bad and soul-crushing that Steven doesn’t even like talking about it, but he did say that the experience substantially forced him to grow as a director, so to a degree, he’s grateful for it.

Films are Murphy's Law, some more than others. Filmmaking is the furthest thing in the world from smooth, especially with limited time, budgets, and resources, but as a director, it’s critical to remember that these are the experiences that forge your iron in the fire and give you the capacity to take on bigger and better projects. As horrendous as they can be, these kinds of experiences prompt the kind of growth that can help you overcome the even larger problems that will come with your future productions. Also, producers are typically attracted to directors who can overcome challenges and odds. So remember, that smooth seas do not make good sailors, and if you’re going through hell on your production, whatever you do don’t give up, you’ll come out of it better and stronger than when you went in.