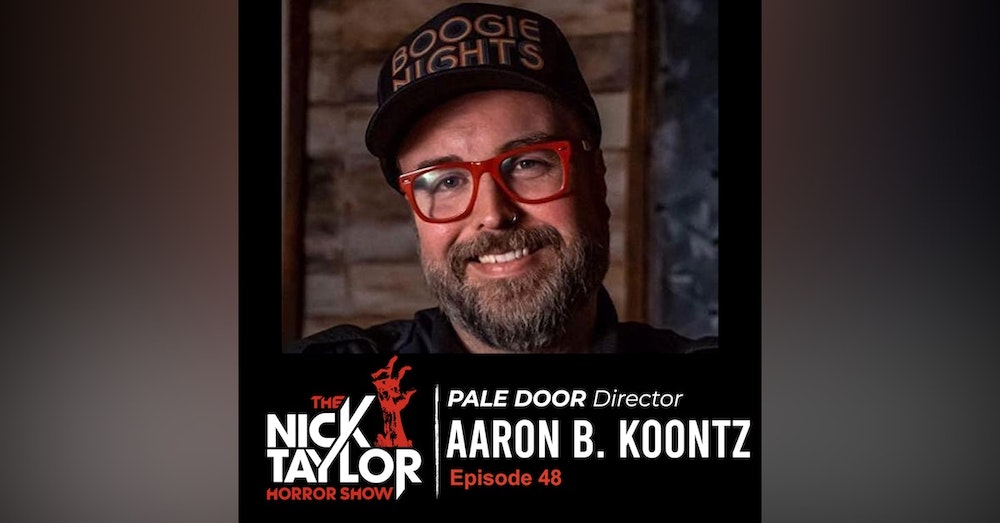 Aaron B.  Koontz is a writer, director, producer, and founder of Paper Street Pictures. Aaron made his feature debut with Camera Obscura, and recently directed the core story in Scare Package, featured on The Last Drive-In with Joe Bob Briggs....

Aaron B.  Koontz is a writer, director, producer, and founder of Paper Street Pictures. Aaron made his feature debut with Camera Obscura, and recently directed the core story in Scare Package, featured on The Last Drive-In with Joe Bob Briggs. Aaron's most recent release was The Pale Door, a horror western about a group of cowboys who take shelter in a brothel, only to find out it’s a coven of ravenous witches. Pale Door was a refreshingly original blast and is now streaming on VOD and coming soon to Shudder.

Here to kick us off are some key takeaways from this conversation with Aaron B. Koontz.

Center yourself. We talked about this a little bit with the Natalie Erika James interview, but it’s worth reiteration. If in the midst of a shoot, you as the director are experiencing negative emotions like anxiety, fear, anger, or frustration,  there’s a good chance you’re going to become irrational and make wrong decisions. Counter this by finding a way to center yourself, even if it holds up production. But don’t go crazy, because it shouldn’t take much time. What Aaron does when things get hectic is he goes to his car to regroup - he puts the music on along with the cool air and just breathes, and two minutes is all it takes for him to get centered. Taking the time to do this is not lazy or self-indulgent; it’s essential because nobody wants to work with an overly emotional director. Figure out what your way to get centered is and make a habit of doing it.

Allow your shit to stink. Aaron mentioned that his first few screenplays and shorts were not, by his own admission, all that great, but it was still important that he make them, if only for the sake of learning how to make films. If you wait until your writing voice is perfect before writing that screenplay, you’ll probably never get around to writing it. Similarly, if you wait until you feel ready to be a director before trying to direct, there’s a chance you’ll never get to it. So even if you don’t think your material is not great yet, make it anyway because you’ll gain the knowledge to get better.

Now, it’s important to emphasize, that this is no excuse for shitty writing or a lack of effort, you should and better work your ass off, but if you’re insecure about your work, it’s still critical that you push forward anyway because what many people don’t seem to realize is that the only way to prepare for becoming a director is by directing.

Insist on that phone call. While pitching his first feature, Camera Obscura, Aaron had been turned down by a production company that he really wanted to work with after months of conversations. When they turned him down, he was level-headed about it, but he requested a phone call with the head producer. They agreed, and as you can guess, this one single phone call ultimately led to his movie getting greenlit.

It’s important to not only never give up but to be very strategic about how you push forward in the face of rejection. After being turned down, Aaron made a very simple & reasonable request for that phone call, and that can make all the difference. When it comes to this business, there's such a razor's edge between things getting made and things not getting made that it’s frightening. You really have to be insistent. Plus, a lot of producers will often test the resolve of the directors they work with by rejecting them at first and observing how they recover. So always ALWAYS insist on that phone call.

You don’t have to be a 20-something; in fact, it’s probably better that you aren’t. Directing requires a lot of intelligence and life skills, like time management, budgeting, and leadership ability. Aaron didn’t begin directing until he was in his 30’s and his knowledge and professionalism tremendously helped push him forward — he was more prepared and able to manage high amounts of pressure which ultimately made him a great director.

So if you’re not in your twenties, take heart, you’re probably way more prepared to helm a movie now than you would have been at 25. I’ve personally been guilty of coming down on myself for not having a feature under my belt by the age of 30, Spielberg made Jaws at 26 for Chrissakes! But as Aaron said, “he’s Steven Spielberg.” If you’re older, you’re wiser, and your insight, intelligence, and sophistication can only make you a better director.

Write every day. Aaron writes for an hour every single day. Every day. No matter what. Unless, of course, he’s directing. But what’s interesting is that to him, writing isn’t always necessarily putting words on the page; in some cases, writing can be as simple as thinking about the material because this is effort towards the development of the work. Therefore it’s important to do it every single day.

Depending on the type of writer you are, you may not want to over-burden yourself with a word minimum, so maybe consider a time minimum during which you write, and if nothing comes, simply think about the material.

Here’s the thing: if all you do is sit for an hour and think about what you’re writing, the connective tissues of the material will remain intact, and this magic thing will happen, where you naturally will start writing in your head throughout your day.  Your brain will naturally keep developing the material and solving the problems of your script subconsciously. But the only way to stay this sharp with your writing is to do it every day. So however you choose to write, do it every single day.

Thanks as always for listening to The Nick Taylor Horror Show, if you enjoyed this episode, why not share it with your friends and family or filmmaking buddies? Don’t forget to follow the show on Instagram & Twitter at @ImNickTaylor. Thanks again for listening!