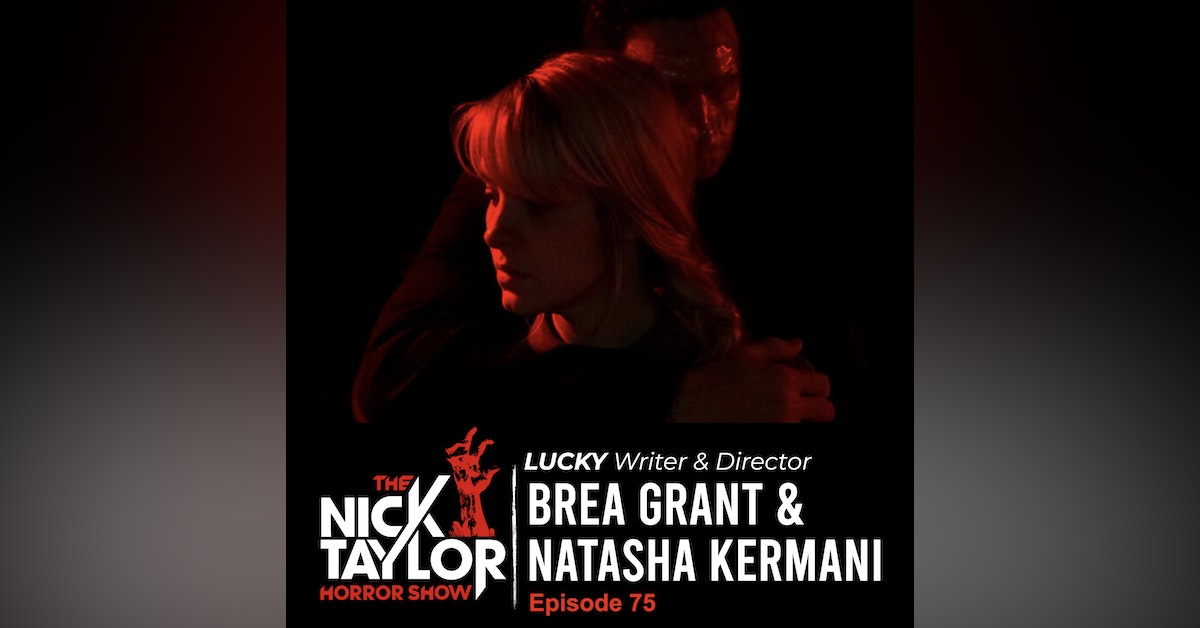 We have a super special episode today with Brea Grant and Natasha Kermani in the house!! Brea Grant is an actress, writer, director, graphic novel author, and a household name in the horror community.  Perhaps best known among us horror fans for...

We have a super special episode today with Brea Grant and Natasha Kermani in the house!!

Brea Grant is an actress, writer, director, graphic novel author, and a household name in the horror community.  Perhaps best known among us horror fans for her acting work in Dexter, Heroes, After Midnight, and Rob Zombie's Halloween 2, Brea also recently wrote and directed the very bloody and very funny 12-Hour Shift, now streaming on Hulu and if that wasn't enough, Brea has released her newest graphic novel Mary: The Adventures of Mary Shelley's Great-Great-Great-Great-Great-Grandaughter.

Natasha Kermani is an Iranian-American filmmaker who made waves on the horror circuit in 2017 with her feature debut, Imitation Girl - a hypnotic, doppelgänger science fiction treat. In what many would call a horror dream team, Brea and Natasha recently came together on Lucky, written by and starring Brea with Natasha directing.

Now streaming on Shudder, Lucky is a dark, satirical slasher with very relevant social commentary - the film tells the story of a young woman who finds herself stalked by a murderous figure who appears in her house every night. With zero help from friends and local authorities, she realizes she has to take this predator out herself. Lucky is not only a very effectively frightening slasher, but it's a refreshingly unadulterated statement on violence against women in America. It's the type of movie that has the potential for multiple interpretations, which is one of the things that makes it as fascinating and powerful as it is.

In this conversation, Natasha and Brea trade career strategies, writing processes and discuss the production story behind Lucky. All of this and so much more on today's episode of The Nick Taylor Horror Show. Now without further ado, here is Brea Grant and Natasha Kermani.

Here are some key takeaways from this conversation with Natasha and Brea.

Take note of Ego vs. Confidence. There is a fine line that directors must always walk when on set - if you're too much of an ego-maniac who barks orders all day without any regard for those around you, your crew will mutiny, as they should. Yes, of course, there are many directorial exceptions to this rule, but by and large, ego is the enemy. However, if you're too much of a pushover, your crew will walk all over you. This is why it's important to distinguish the difference between ego and confidence. Confidence is a necessary part of any directing job, as your entire cast and crew will turn to you to make decisions on just about everything, and you need to have an answer or solution. In order to do that, you need confidence in your ability to lead. A film crew, just like a sea crew, needs a captain they can rely on. Without confidence, you'll be eaten alive, but with too much ego, you'll be ignored. Learn the difference between the two and strike the balance.

Take the time and space necessary. Directing is largely a game of hustle. Hustling to get your shots, make your day, and ensure everything goes according to plan. In the midst of all of this hustle, a lot can get lost in the fog, which is why it was very refreshing to hear Natasha talk about the importance of taking the time and space to get the shots right. Directing relies so much on your cognition in order to effectively tap into and communicate your creative vision. Rushing all the time and exerting stress on each and every move can obliterate your creativity. Yes, it's critical to make your day and get your shots without being too precious about details, but like everything, this is a balance. It’s important to ensure that you breathe and take the time necessary to get what you need to get when the cameras are rolling, instead of just moving on every time. Unless you're behind on schedule, in which case, yeah, you should probably move on.

Work with those who will challenge your decisions. Making a movie is a matter of melding together an infinite amount of decisions; everything from casting choices to camera angles, lighting cues, wardrobe details, the decisions are endless. As a director, your job is to either make those decisions or hire someone you trust to make them for you. A director needs to have a growth mindset by embracing the necessity to get better with every movie by learning as much as possible. One of the best ways to do this is by learning from the cast and crew that you're privileged enough to work with. This enables you to draw from decades of experience on a single movie, but similar to the first point requires the relinquishing of ego. Natasha spoke of the importance of having people around you who will respectfully challenge your decisions. This is priceless. Since you want always to be getting better, the best way to do this is by surrounding yourself with trusted collaborators who can teach you and make sure that every detail of your movie is as good as it can be. You do not want a cast and crew of order takers who will do what you say just because you're the director. Instead, you want an open field of communication between yourself and your key collaborators so that everyone can do the best job they can. This requires you always to be open to feedback and selecting people to work with who will challenge your opinions with their expertise for the sake of the movie.