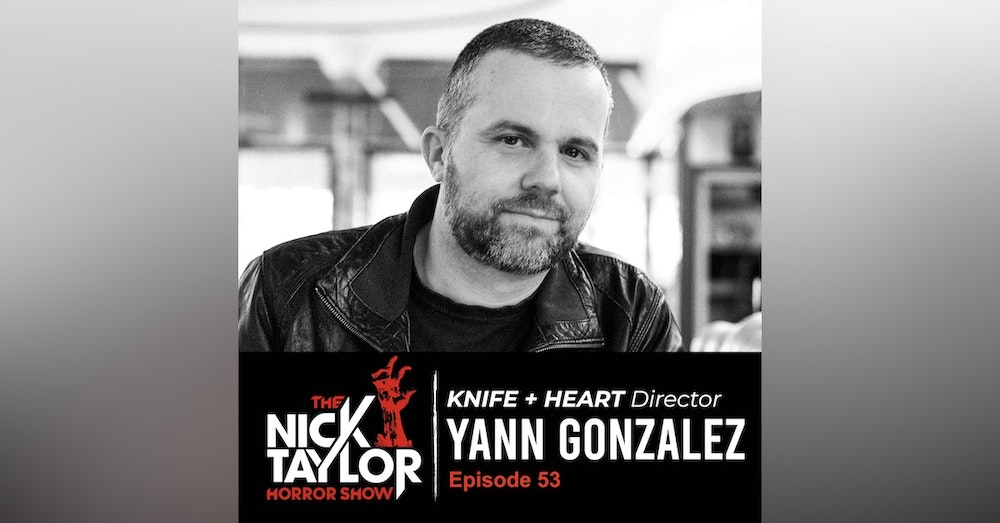 Yann Gonzalez is a French filmmaker who made his feature debut with You & The Night and followed it up with his incredible tour de force second act, Knife + Heart.    On top of being a breath of fresh air of originality in the horror...

Yann Gonzalez is a French filmmaker who made his feature debut with You & The Night and followed it up with his incredible tour de force second act, Knife + Heart.

On top of being a breath of fresh air of originality in the horror genre, I think I will dare to say that Knife + Heart might be one of the best, if not the best neo-giallo ever made. To me, it didn’t just nostalgically pay homage to the giallo genre; it modernized it and deeply personalized it.

This movie was miraculous to me - hypnotic, scary, emotionally poignant, and entirely new and different, and I think it was one of the best movies of last year. It really blew me away, which is why I was so excited to get to speak to Yann.

We get into Yann’s director origin story, the importance of tapping your unconscious as a director, as well as the difficulty of establishing strong creative bonds with key collaborators. All of this and so much more on this very wide-ranging episode of The Nick Taylor Horror Show. Now please welcome, director of Knife Plus Heart, Yann Gonzalez.

Big thanks, Yann, for being with us today - he is such a fascinating and infectiously passionate visionary, and it was very inspiring to talk to him, and I’m so psyched to see what he does next.

Here as always, are some key takeaways from this conversation with Yann Gonzales:

Don't do anything for free. Knife Plus Heart is just saturated with colored lighting, elaborately beautiful imagery, perfectly framed shots, and unadulterated gorgeousness. But, it all serves the story. Yann talked about how he arrived at the look of the film with his DP by describing the moods he wanted to create. In many cases, the colorfully lit shots were reflective of the emotion of the scene that was taking place, so it all coalesced even better into a mood that served the story.

There’s a world of difference between style for style sake and a production design that’s purposeful and in synch with the rest of the movie. Having elements in your movie that look pretty but don’t have a deeper meaning may increase your perceived production value, but will ultimately come across as disjointed to the viewer.

Instead, ensure there’s meaning behind everything on screen from costume design to the lighting cues and locations. When this is done right, there’s a coherent synchronicity that occurs when all of these elements work together to form a cohesive whole, which ultimately makes for highly immersive and unforgettable cinema.

Tap your own unconscious. Alright, buckle up because we’re getting metaphysical here! There are certain rare directors who are able to tap their own unconscious and deliver images, moods, and tones on screen that are undeniably hypnotic. David Lynch, Stanley Kubrick, and Federico Fellini are prime examples, and so is Yann. In the work of these artists, there are moments that narratively may not make sense on paper, but when they’re executed right, they tap into something beyond your conscious awareness as a viewer, causing this mysteriously strong resonance.

In order to do this as a director, you have to really be in touch with your own unconscious. The unconscious is a difficult concept to articulate, but, as a director, it largely comes down to paying attention to all of the things that you are naturally drawn to and perceiving and conveying your perceptions on screen.

You can be a great writer-director who relies strictly on her intellect to make a great movie, but you can go deeper. Tapping this creative intuition is the name of the game, and it requires you to transcend your immediate conscious logic to create work that defies convention and reflects your own individual sensibility. David Lynch refers to this as catching the big fish, in reference to great ideas. He goes on to say that small fish, smaller ideas, can be caught at the surface of the conscious mind but to get the big fish, the big powerful ideas, you have to go deeper into your unconscious.

A lot of brilliant creatives have talked about how they have no idea where their great ideas come from - this is the unconscious at work. Even Steven King says that it’s all the work of the muse. Muse, unconscious, whatever you want to call it, find a way to get in touch with yours. Whether its transcendental meditation, certain substances, or immersing yourself in everything that you’re naturally drawn to, it’s important as an artist to be in touch with all of this and find ways to dive beyond the surface of your conscious mind.

If you want to learn more about any of this, check out Catching the Big Fish by David Lynch.

Famous Collaborations are a hard road, but a road worth traveling down. Yann spoke about two very important collaborations he had making this movie, one was with his DP, and the other was with his brother, Anthony Gonzalez, the frontman of M83. In both cases, Yann had some very painstaking back and forth with both the music and the look of the film in order to get them where he wanted them. But, despite the time commitment and the difficulty, he stuck to his vision and trusted the process and, as a result, developed a great working relationship with both of these people who now are intimately acquainted with his cinematic style & sensibility. This is what you want, collaborators who can get into your head and know what you want even without you saying it.

Getting to this point can be a hard & long hard process, and you may not be able to get there with the first person you work with.  But once you go through the pains of it, you’ll likely have a collaborator for life who will know your taste, who will know your style, and you’ll develop a very intimate creative shorthand with each other.

Your collaborators, the people responsible for bringing your vision to life - it’s imperative that you understand each other. So invest in those relationships.

Thanks as always for listening!