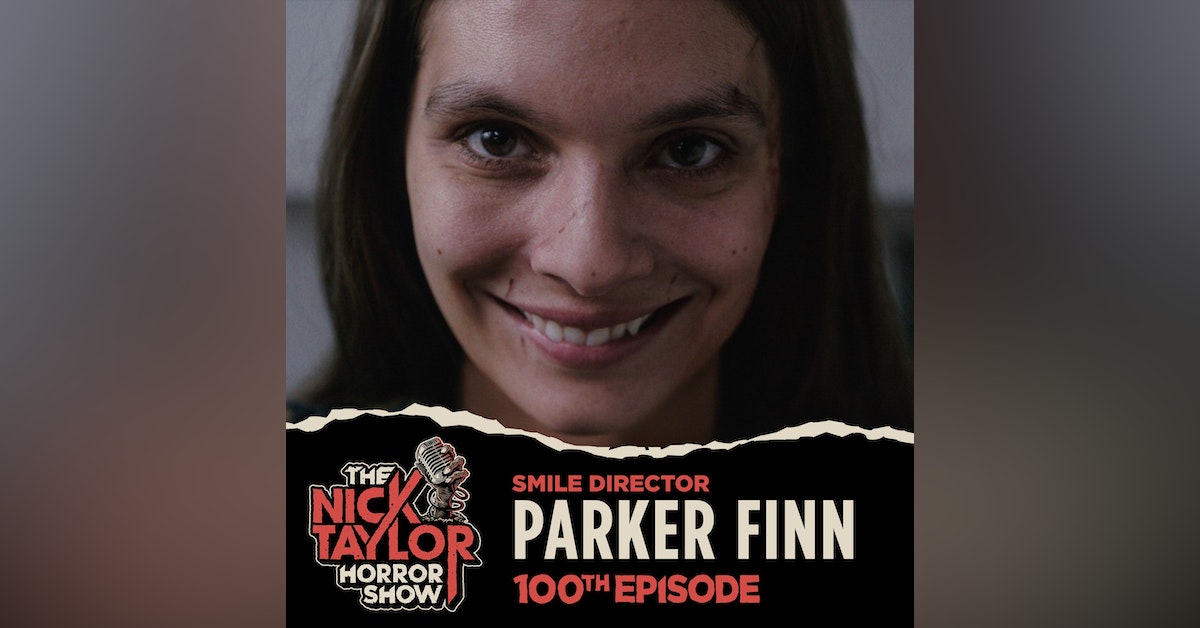 As always, each episode of The Nick Taylor Horror Show explores how today's horror filmmakers are getting their movies made while deconstructing their methods and career strategies into practical insights that you can use on your own horror filmmaking journey. This includes their creative processes, funding resources, favorite books & tools, key life lessons, and much much more.

I have a very special episode in store today, one that should put a smile on all of your faces. That's right, Parker Finn is in the house! Parker is a man who should need no introduction for us horror fans as the director behind one of this year's breakout horror hits, SMILE.

First of all, I owe an enormous thank you to my friend Joe Russo who made this interview happen. Joe, you're the best, and I thank you very, very much.

So, Parker has obviously been doing a lot of interviews recently, and I made an effort to make my questions as unique as possible. As a result, we got into a lot of the craft of SMILE, how he worked with actors, his DP and editor, and the keys to crafting effective scares. One thing we didn't get into very much was the overall origin story about how SMILE, Parker's very first feature, came to be. So I will give you the short version right here.

In 2020, after struggling as a filmmaker in Los Angeles for about 8 years, Parker made a short film called LAURA HASN'T SLEPT for roughly $30,000. LAURA HASN'T SLEPT ultimately got into SXSW, where it won the Grand Jury Award and shortly thereafter got the attention of Paramount, who offered Parker the opportunity to direct a feature adaptation which turned into SMILE. SMILE was originally intended to go straight to streaming on Paramount plus, but after a series of overwhelmingly positive audience reaction tests, SMILE was given a wide theatrical release. To date, SMILE has made over two hundred million at the box office, making it one of the highest-grossing horror movies of all time, which for a first-time director, is really fuckin cool.

For a more comprehensive deep dive into Parker's origin story, definitely check out Mick Garris' conversation with Parker on the Post Mortem podcast. I listened to that right before doing this interview to make sure we didn't cover the same ground, so the two are very complimentary if you want a fuller picture.

Here are some key takeaways from this conversation with Parker Finn:

Do one thing really right in your short.

Parker's short, LAURA HASN'T SLEPT, is excellent and was the catalyst that led to him getting SMILE made. You can actually watch LAURA HASN'T SLEPT on the upcoming SMILE blu ray release or for free on YouTube right now (link is in the show notes). When it comes to shorts, Parker claims that lots of filmmakers try to make their shorts do too many things when instead, focusing on doing one thing really, really effectively is what makes shorts stand out. Focusing your forces allows your shorts to go deep instead of wide, which is suitable for the short-form medium, which is intended to be a single act, a single movement, and therefore is best suited for a single focus. Parker also recommends pulling off things that are not typical or difficult to do in your shorts to show what you're capable of as a director.

Start with character and then throw their worst-case scenario at them.

Parker has spoken at length about how the scariest horror movies are most powerful when you care about the characters that the terrible things are happening to. Horror filmmakers must be effective dramatists firsts by enabling the audience to empathize with their characters. Effective horror works through empathy because if done right, your audience will experience terror through your characters. With this in mind, it's critical to ground your characters with honesty and relatability so the audience can connect with them upfront. If you fail to properly build empathy, the audience will simply observe your characters from the perspective of a detached third party which just isn't as scary as experiencing the horror through them firsthand. Next, once you figure out who your characters are and make the audiences care, design and fine-tune the horror element to be the worst-case scenario for them specifically.

Parker mentions that when crafting fear, he typically relies on his intuition while shooting but then applies more analytical thinking when approaching things like building tension and scares in the edit. Horror relies on a critical balance between science and intuition, left-brain and right-brain thinking. To craft fear, you need to have an inherent human understanding of what is frightening. In addition, it's important to recognize that horror is a seduction, one that relies very heavily on pacing, which is why your editor is one of your most important collaborators. Also, it's near impossible to be objective about how scary your own movie is because you're likely to be too close to it, so you may want to do what Parker did and test your scares. Parker would sit people down to watch certain scenes during the edit to observe whether they would actually get scared.

Don’t get caught up in the noise.

Parker reflects on his eight years in Hollywood and constantly hearing all manner of bad advice for filmmakers. He also observed multiple industries aimed at exploiting aspiring screenwriters with crappy resources and products. Parker considers this to be a bunch of noise and says it's important for directors to phase it out. He recommends focusing on you as an artist. What speaks to you? What are you most interested in, and what will you be able to focus obsessively over in your movies? These are typically the kinds of projects that break the most new ground because they're personal, unique, and directors care way more about them. Phasing out the noise can help you individuate your vision and films so they can stand out in the industry. These are the kinds of films that the industry needs and the kinds of films that fans prefer, and honestly, given the recent success of films like SMILE, TERRIFIER 2, and BARBARIAN, right now could not be a better time for original horror.

Episode 100 in the bag! A big huge thank you to you, dear listener. Without you and your support, this podcast would not be possible. Looks like I'll be taking a short break before coming back with season 4, but in the meantime, keep in touch and keep those cameras rolling.

Thanks again for listening to the Nick Taylor Horror Show!