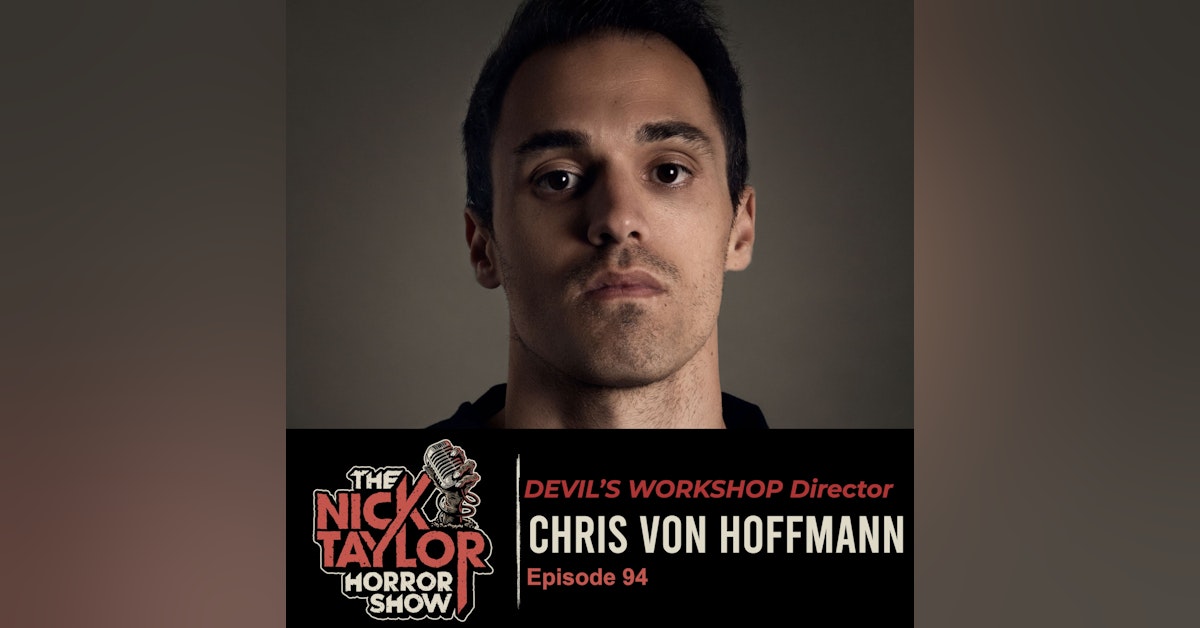 Chris von Hoffmann is the writer/director behind multiple features including Drifter, Monster Party, and most recently, Devil's Workshop. In Devil’s Workshop, Clayton a struggling actor is desperate for a role as a demonologist. But he has hostile...

Chris von Hoffmann is the writer/director behind multiple features including Drifter, Monster Party, and most recently, Devil's Workshop.

In Devil’s Workshop, Clayton a struggling actor is desperate for a role as a demonologist. But he has hostile competition with his long-time rival, Donald. Determined to get the role at all costs, he contacts Eliza, an expert in demon lore, to help him prepare. Spending the weekend at her home, Eliza forces Clayton to confront his troubling past through the practice of dark rituals. Does she want to help Clayton, seduce him – or destroy him? The shocking climax will set your soul ablaze. The movie stars Timothy Granaderos and Radha Mitchell with Emile Hirsch as well.

So I actually worked on Devil's Workshop as Associate Producer AND, I am actually in the film. That's right, you can see yours truly acting, or at least trying to act, in the first and last scenes of the movie. So check me out. Devil's Workshop is available on VOD and select theatres September 30th so check your local showtimes.

In any case, I enjoyed the hell out of this conversation with Chris and hope you do too. Please give it up for writer/director, Chris von Hoffman.

Nobody's going to make your movie but you. Chris has directed three features, and he's likened the process of getting a movie made to pushing a boulder up a hill by yourself. Every single time. He realized early on, that nobody will ever want to make his movies more than he does, and therefore, the entire fate of the movie is on him, ALWAYS. It's your responsibility to push your movies forward, not your producer, you. Movies can evaporate so quickly; things fall through, people forget to get back to you, funds suddenly become unavailable, it's endless. You need to assume extreme responsibility and ownership for the fate of your movie because nobody will make it happen other than you there are many forces against you.

Have zero tolerance for unprofessionalism. When asked about remaining calm on set and managing his crew during difficult times, Chris mentioned that he is generally patient but has no tolerance for for blatant unprofessionalism, and I think this is a really good rule. As a director, there's a fine line between being a dictator and being a pushover. You want your crew to respect you, but if you bark orders at them and/or yell a lot, they will lose respect for you. But too much leeway and turning a blind eye can also be problematic. This is a fine balance, and a key to it is to refuse any blatantly unprofessional behavior. What is unprofessional behavior on set? You'll know it when you experience it. Movie making is chaos, and people are typically (hopefully) trying to do their best work possible, so be as patient as you can, but refuse to tolerate unprofessionalism.

You are going to catch heat, no matter what. As I mentioned in the interview, Guillermo Del Toro once likened film directing to eating a shit sandwich but with each movie you get a little bit more bread. No matter what, movie making is a game of taking a lot of shit and a lot of heat from multiple people. Arguably, films entail more decisions than just about any conceivable type of project, and people have no shortage of opinions, both creatively and professionally and people also have no shortage of judgement. Between your investors, producers, cast crew, no matter how good a job you think you're doing, you're gonna catch heat for something and be under a lot of constant scrutiny throughout the course of making your films. So get used to being in the hot seat and being comfortable being uncomfortable. But, also remember, it gets a little bit better with each movie you make.

Thank you guys for listening, don't forget to check out Devil's Workshop, available from Lionsgate on VOD and in select theaters starting tomorrow, September 30th.

Til next time, don't forget to subscribe, and thanks again for listening to the Nick Taylor Horror Show.