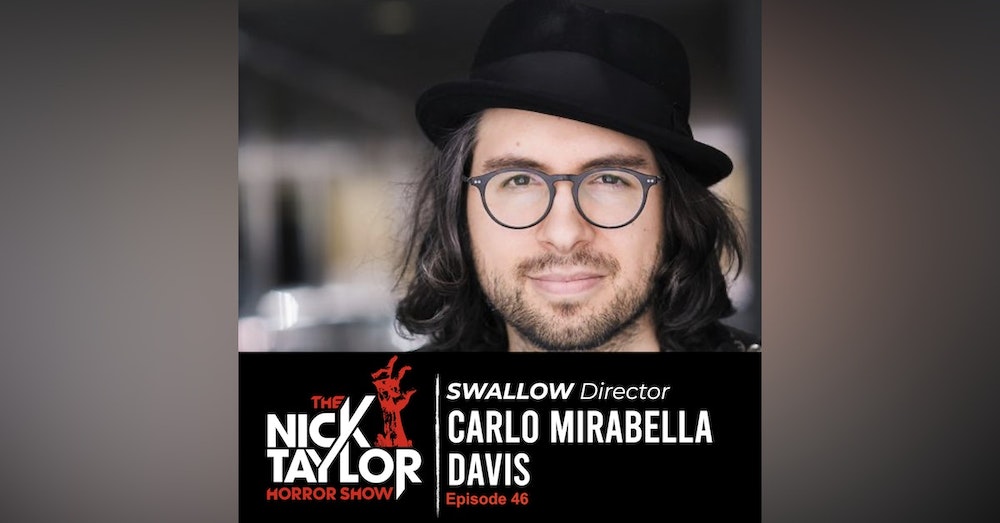 "One of the most important totem animals for me as a filmmaker is the wolf. Because the wolf is known for its endurance and as a filmmaker, you really need to have endurance. You have to keep the hearth fires burning of your creativity, your imagination,

Carlo Mirabella Davis is a writer & director who just made his feature debut with Swallow. Swallow tells the harrowing tale of a newlywed housewife who’s oppressive existence forces her to succumb to a compulsive urge to eat non-food items like dirt, thumbtacks, marbles, and more. The condition is real, and it’s called Pica. While the movie paints a very compassionate portrait of a Pica sufferer, it does not shy away from the horror of the disease, which is partially what makes Swallow so powerful. Joe Bob Briggs left a glowing review of Swallow, which I recommend reading. If only for the Drive-in Totals.

In talking to Carlo, I was struck by the attention to detail with which he approaches his films. His decisions as a director are all significant and comprehensive, and in this interview, we learn more about his process. We also hear how he got his first movie off of the ground as a first time director and learn about the real-life inspiration of Swallow.

Now for your listening pleasure, here is Carlo Mirabella Davis.

Here are some key takeaways from this conversation with Carlo Mirabella Davis:

Be thorough. There is a severe level of craftsmanship in Swallow as every scene, choice, and moment feel meaningful. It is clear from the get-go that every detail of the movie was thought through and presented with purpose. The movie has multiple layers, all loaded with subtext, but the film remains buoyant. The movie moves with this light smoothness, all while retaining its depth. It’s a pretty masterful balance, which seems to have been achieved by Carlo and his team’s attention to detail. So the takeaway here is to do your homework and work with your team to think through every conceivable aspect you can.

Everything from subtle costume details, to production design and camera direction, are all driven by the story. You don’t hear enough directors talking about this level of purposeful attention to detail. A lot of directors want great costumes and gorgeous shots, but overlook the power of aligning the critical, creative choices in their movies with purpose. Carlo does this to a considerable degree, and it gives the film a very profound depth that you can feel.

Consider approaching horror as an ingredient as opposed to the primary genre. First of all, I’m a quintessential gorehound who just watched Blood Sucking Freaks for the umpteenth time with Joe Bob Briggs, so I love pure horror as much as the next guy. But, it’s worth noting that horror can work exceptionally well as a drama delivery system. If you mix a horror element with a deeply rooted drama with believable characters and relatable emotions, you can have some real magic on your hands. This magical mix was the case with Swallow, which has a significant horror element but is mostly a drama. The horror element makes the drama work better, and the drama makes the horror element work better. The two go hand in hand when presented together because good drama creates realism, which makes the horror element more believable, more terrifying, and more effective.

The other thing worth mentioning regarding this point is that non-horror directors directed some of the best horror movies: Friedkin with The Expecist, Kubrick with The Shining, Jonathan Demme with Silence of the Lambs, James Cameron with Aliens, Spielberg with Jaws, the list goes on. As much as we all love a good gorefest, directors who understand drama make some killer horror movies.

Find the dark humor. Similar to how drama can make horror work better, humor can make horror more bearable. As Carlo said, dark humor helps the medicine go down - humor strategically used can help an otherwise visceral and painful to watch movie more bearable. This was the case in Swallow, which had a few solid laughs here and there, which gave the film a disturbing levity to it that again, helped the horror work even better while making the movie more palatable.

Thank you for listening! If you enjoyed this episode, why not tell your friends and family and filmmaking buddies about it on social media? Don’t forget to follow the show on Instagram at @imnicktaylor and on Twitter at the same handle. Thanks again for listening to the Nick Taylor Horror Show.