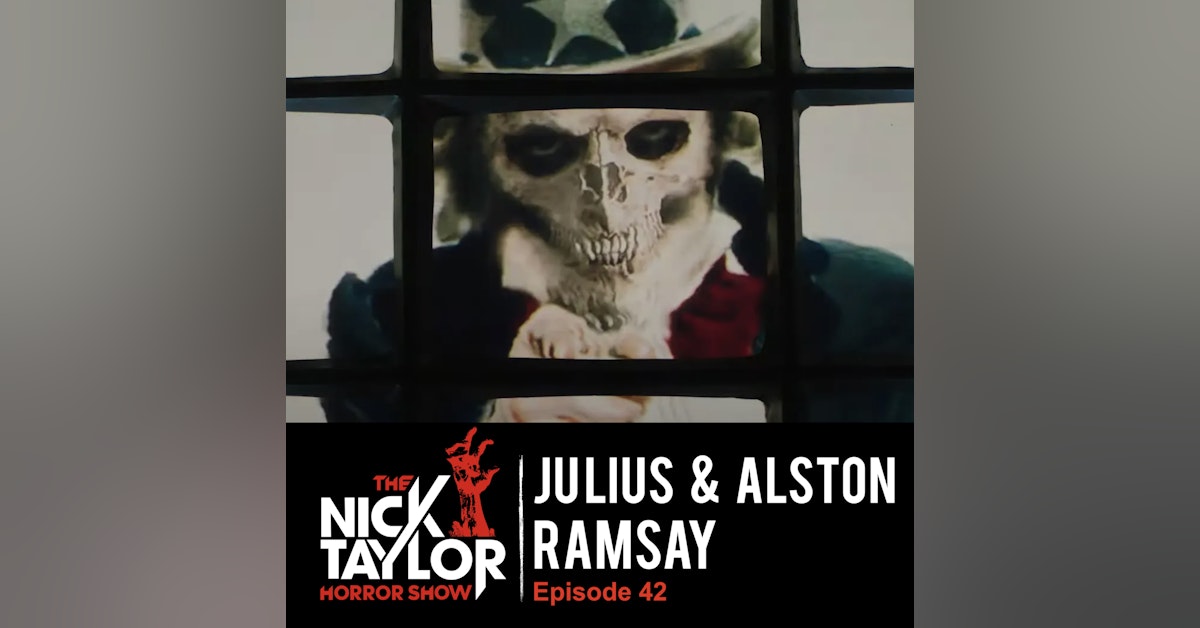 “When you put boundaries up it can actually help you be more creative, because you think 'what’s an interesting way of doing something like this?' so you don’t feel like you’ve seen it before even if you have."

Alston & Julius Ramsay are two brothers and a writer/director duo. The Ramsay brothers made their feature debut with Midnighters, a high octane indie thriller released by IFC Midnight in 2017. Their most recent feature is The Current Occupant is the latest entry in Blumhouse’s Into the Dark series on Hulu. For the uninitiated, Into the Dark is a Black Mirror-like series of self-contained feature horror films produced by Blumhouse where each episode thematically represents a different holiday.

The Current Occupant was themed around Independence Day and tells the story of a man committed to an asylum who believes himself to be the president of the United States. The Current Occupant is a fascinating and highly entertaining institutional horror thriller and is available on HULU today!

The Ramsays have a varied and fascinating background: Alston, was a former speechwriter for multiple prominent political figures like Secretary of Defense Robert Gates, General David Petraeus, and Secretary of Homeland Security Jeh Johnson. While Julius edited for multiple TV shows including Battlestar Galactica and has directed for Blumhouse’s The Purge TV series and multiple episodes of The Walking Dead.

The Ramsays were a whole bunch of fun to talk to and their latest feature, The Current Occupant, is now streaming on HULU.

Here are some key takeaways from this conversation Julius & Alston Ramsay:

Move forward as if. Alston mentioned a golden production tactic someone gave him which was to put a hypothetical date on the calendar for principle photography and simply move forward as if that’s when you will begin shooting. When making independent movies, there are so many variables, so many that most directors get overwhelmed and feel the need for everything to be figured out before they can even begin principle photography. What few people tell you is that the best way to do this is to work the other way around. Come up with your ideal date, and then back all of your production plans into it.

There’s real brilliance to this idea, because it not only psychologically orients you towards shooting, which is very powerful in and of itself, but this tactic makes your project sound more real to the producers you’re pitching because you have an actual date. So pick a date and mark it on your calendar - even if you have to reschedule, it will be a starting point that can give you the momentum you need.

There’s horror all around you, take notice. Alston spent a lot of time working in politics as a speechwriter, and because of that, brought a breadth of perspective and experience into The Current Occupant. His work history gave the movie an authenticity because it was partially based on his personal experiences which is where some very rich horror concepts can come from.

If you’re an aspiring filmmaker who has a non-film related day job, take heart because the idea for your movie might be right in front of you. Waiting tables? It’s been a while since there was a good restaurant horror movie. Working in an office? Take a look at Belko Experiment, American Psycho, Mayhem, and technically Cabin in the Woods. Don’t discount your current experiences as time wasted if you’re not making movies yet - dig deep into these experiences because they just may have the germ of a great horror concept in them.

Collaborate with a sibling, or someone like a sibling. I have spoken to multiple filmmaking duos and they are often childhood friends or siblings. When picking collaborators, it’s critical to remember that you will inevitably get into conflict, therefore, having a strong rapport, and the capacity to fight and rapidly recover is mission critical. Where it may not always be realistic to pick a sibling to make a movie with, as Alston said, pick someone who you would want in your foxhole, because making a movie is going to war. Therefore, it’s important to be on board with someone who will have your back when the going gets tough, because it inevitably does throughout the course of indie filmmaking. So pick your production partners accordingly because when the chips are down you’ll need someone who cares.